Norishige (則重), Enkyō (延慶, 1308-1311), Etchū – „Norishige“ (則重), „Saeki Norishige saku“ (佐伯則重作), he lived in the Gofuku (呉服) district (Gō, 郷) of Etchū province and is therefore also called „Gōfuku-Gō“, whereas at the latter nickname the character for „Gō“ (郷) is often also replaced by (江), relative many signed blades are extant and regarding date signatures, we know an oshigata from the „Umetada-oshigata“ which is dated Enkei two (延慶, 1309) and an extant tantō is dated with Shōwa three (正和, 1314), he is listed as one of the „Ten Students of Masamune“ but the known date signatures of Norishige suggest that he was rather a contemporary than a student of Masamune, in the Nanbokuchō period Ki'ami-hon mei-zukushi (喜阿弥本銘尽) we find the following entry: „student of Shintōgo Kōshin (新藤五光心)“, i.e Shintōgo Kunimitsu, that means he was a fellow student of Masamune under Kunimitsu, an approach, which is in recent years more and more accepted. Hokurikudō (北陸道), saijō-saku.

Designated as Tokubetsu Jūyō Tōken at the 24th tokubetsu-jūyō-shinsa held on the 27th of April 2016. 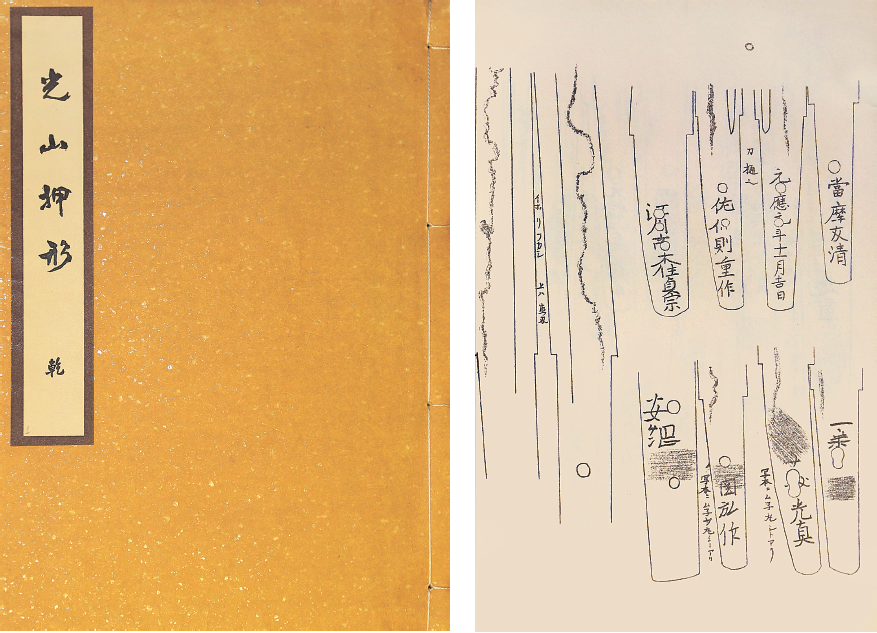 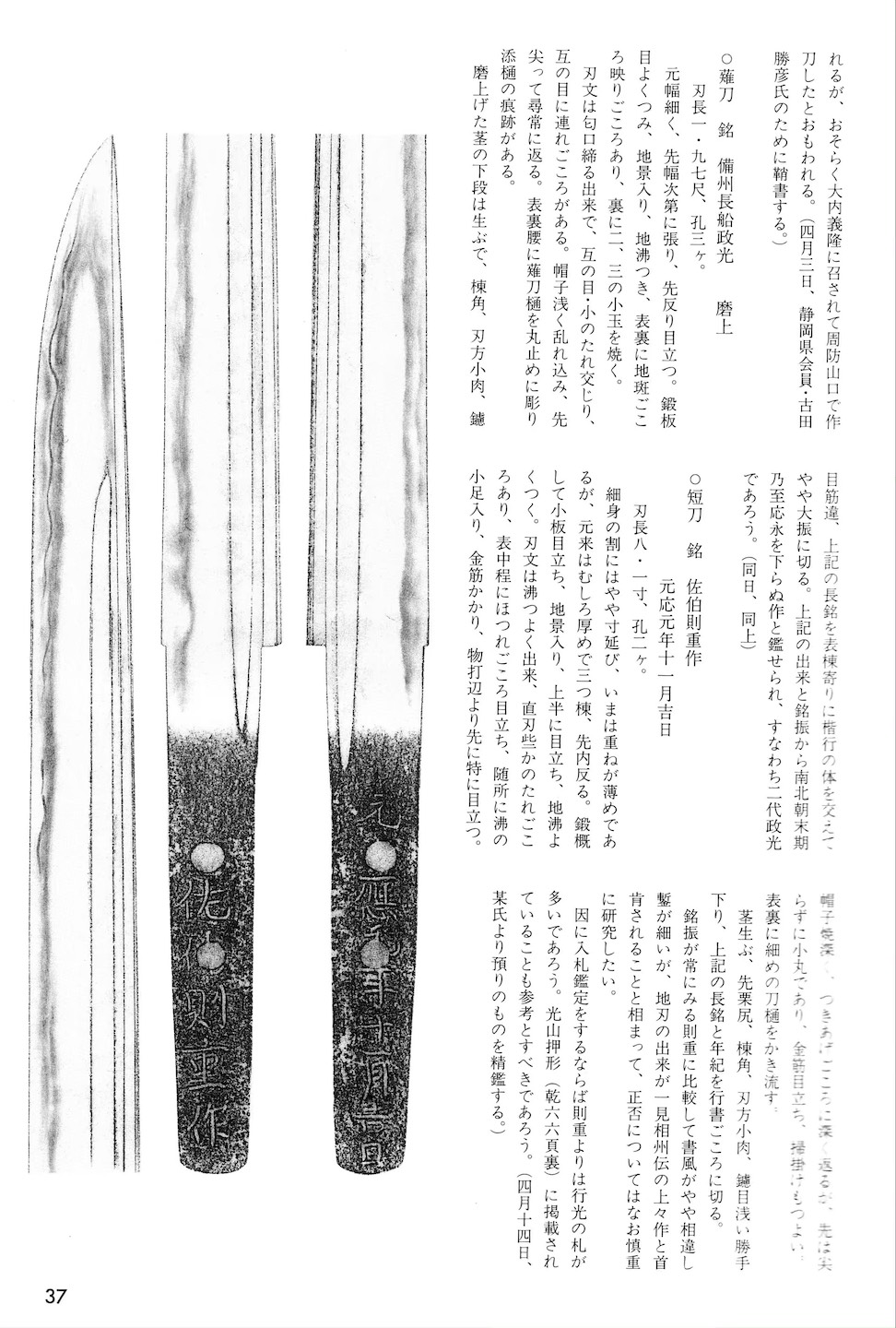 A unique feature of this sword is its signature type. This is the only extant work with Norishige’s most complete signature, as well as the most complete date. The sword was signed “Saeki Norishige Saku,” using the full name of the master and with the addition of the word Saku. When specifying the date, the master also used the most detailed of all possible methods: “on a lucky day of the 11th month of 1319.” This method of dating is used only on this tantō and nowhere else, even in old oshigata, except those depicting this same sword. Norishige left us many examples of his creativity and various examples of signatures on his works. Among them, there are both typical and somewhat different signatures, such as those described above. The surviving swords include works of a very high level and status that were in the collections of very famous and powerful persons of their time. There are also works that are considered National Treasures and are part of the Imperial Collection. However, in our time, there is only one sword (namely, this tantō) that is signed using the name of the clan where Norishige was born—Saeki—and that is dated using the word “lucky” when specifying the day in the date of manufacture.

Only one other sword, besides this one, has a signature containing the full name of the smith (Saeki Norishige): Jūyō No. 31. Unfortunately, its nakago was shortened, and it is not known whether or not it contained the word Saku at the end of signature. There are some oshigata of lost long swords with a signature and a date on one side of the nakago, but the full name and the full date are found on this tantō only. All of Norishige’s other swords might have higher status and might originate from collections of very famous historical figures, but, in regard to Norishige’s signature, this tantō, which has “only” Tokubetsu Jūyō status, will forever remain a kind of standard for other swords to be measured against. All fundamentally possible variants of kanji combinations in the master’s signatures are found simultaneously on the nakago of this sword. As an example, we can cite the March issue of NBTHK’s Tōken Bijutsu No. 530, in which all swords with Norishige’s long signature are discussed. It says that there are only two works with the name Saeki. But only one of them has a nakago of a completely authentic form (ubu) —this tantō. As a result, the master’s signature also contains the word “Saku” at the end of the signature.

The importance of preserving this sword cannot be overstated for future analysis as well. This is particularly pointed out in NBTHK’s conclusion: “The sword is very important as a reference.” The very example of this nakago helps us learn Norishige’s method of writing two additional kanji in his signature, “Saku” (作—“made”) and “Kichi” (吉—“happy,” “lucky”), which can be found nowhere else. Only the Ōseki Shō (往昔抄), on p. 91, shows an example of the signature “Etchū (no) Kuni-jūnin Norishige Saku.” Yet it is not depicted in the form of a tang oshigata, but as an example of a signature as a simple kanji sequence. This indicates that Norishige used the “Saku” kanji in his signature, but other oshigata, except for the described tantō, have not survived.

Moreover, the signature on the described tantō contains all the characteristic features of the way he wrote the “Nori” and “Shige” kanji, described earlier, which are necessary for determining the signature’s authenticity. Thus, there can be no doubt about its authenticity. Consequently, the importance of this tantō for research purposes cannot be overemphasized. This extraordinary sword can easily be traced in old sources, from which we can draw a conclusion about Norishige’s fame, at least in the beginning of the Edo period. The Kōzan Oshigata, for example, contains 2,727 oshigata and descriptions of tangs. It was compiled in accordance with Hon’ami Kōzan’s (本阿弥光山, 1634–1714) records by his son Hon’ami Kōtei (本阿弥光貞). The oshigata of this tantō is presented in the first volume, on p. 82/2, and is the only example with the full written form of the name Norishige.

In addition to noticing the signature’s features, we must pay attention to the highest level of skill the master exhibited when manufacturing this tantō. It can be considered one of Norishige’s most classic works, where the sugata took the form of takenoko-zori, and we can see the extremely high activity of all the ji and ha elements that characterizing matsukawa-hada. The microscopic defect that appears along the lines of where one of the metal layers folded in the ji area can also be considered a classical one, which always existed in the master’s work. In this regard, even more surprising is the existence of the long sword described earlier, the Tokubetsu Jūyō Norishige Katana, which has absolutely clean surfaces of ji and ha and no signs of even minor defects.

<.....> Of course, all the above attributes of this tantō are reflected in its earlier assessment by Hon’ami. The tantō price of 200 mai is very high, even for the best tachi, let alone short swords, which, all else being equal, were always assessed at a lower price. There are few surviving swords with a higher monetary value. It is possible to give the following examples of meibutsu, estimating the prices for tantō made at different times: “Atsushi Tōshirō,” 500 mai; “Masuda Tōshirō,” 300 mai; “Gotō Tōshirō,” 300 mai, “Nabeshima Tōshirō,” 150 mai; “Asakura Tōshirō,” 100 mai; “Komatsu Masamune,” 700 mai; “Fuma Masamune,” 300 mai; “Fushimi Masamune,” 300 mai; “Bungo Masamune,” 200 mai; and “Dōi Masamune,” 200 mai. Of course, it is necessary to take into account the era and the person who performed the assessment of the sword and bear in mind that the monetary evaluation made during that era does not reflect the sword’s innate high quality. Moreover, it is impossible to talk about a mathematical relationship between this estimate and the price of the sword nowadays. However, it helps to give us an idea about the importance and value of this tantō by Norishige. Unfortunately, the origami with Hon’ami’s evaluation has not survived, and neither the original nor its copy has been restored in modern times. For this matter, we have to rely on the sayagaki, which was done on the old shirasaya by Hon’ami Chōshiki (本阿彌長識, the 6th generation of the Kōzan line, ? –1893).

<.....> An interesting situation is also observed regarding the inscriptions made on an old wooden box for this tantō, which apparently was constructed in the Meiji period. It has the following inscriptions: in larger kanji: “Saeki Norishige tantō”; and in smaller ones, three columns under the main inscription: “nagasa 8 sun, omote, ura, katana-hi, the first year of Gen’ō.” On the back of the lid, there are two characters symbolizing the sword, and above them, there is an area with an erased inscription. Thus, this sword is an example of the very careful removal of all possible traces concerning the history of who possessed this tantō made by Norishige. Without a doubt, the sword was in the collection of a very influential and well-known clan, and public information about its sale could have inflicted some harm on the clan’s reputation. Selling a high-level sword was not good for a clan’s reputation, especially for a famous and powerful clan. Selling a sword that was a family heirloom was even worse, so the clan would have tried to keep the seller’s identity incognito. The authentic Hon’ami origami could have also contained information on the origin of this tantō. In most cases, such documents at least included data on who handed over a sword for assessment.

The absence of Hon’ami’s original paper origami and part of the inscription on the box certainly affects the value of any item being sold. Thus, when selling this tantō, the previous owner consciously agreed with the considerable decrease in its value and performed a careful and accurate job in order to keep himself incognito. Modern information technologies offer us new search possibilities. Perhaps someday it will be possible to find and read the original origami for this sword or a copy of it or else read the painted section on the box to determine whose family heritage it was. Up to now, the missing information has been a little secret that accompanies this unique, very rare, and extremely beautiful sword.