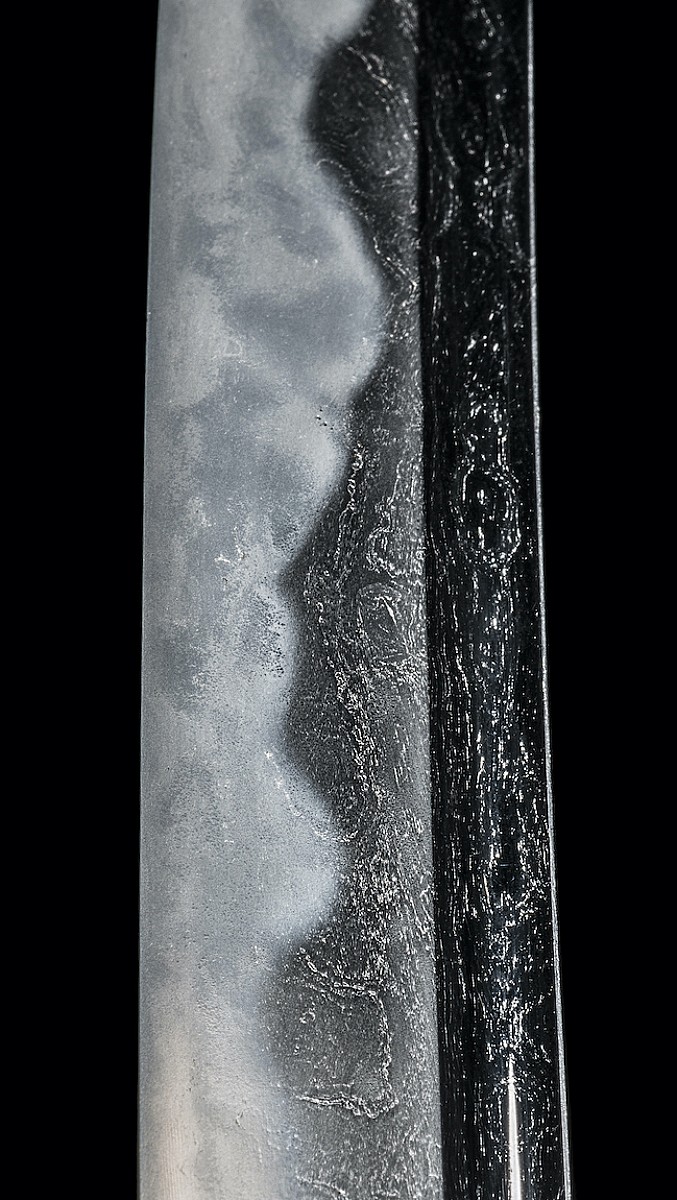 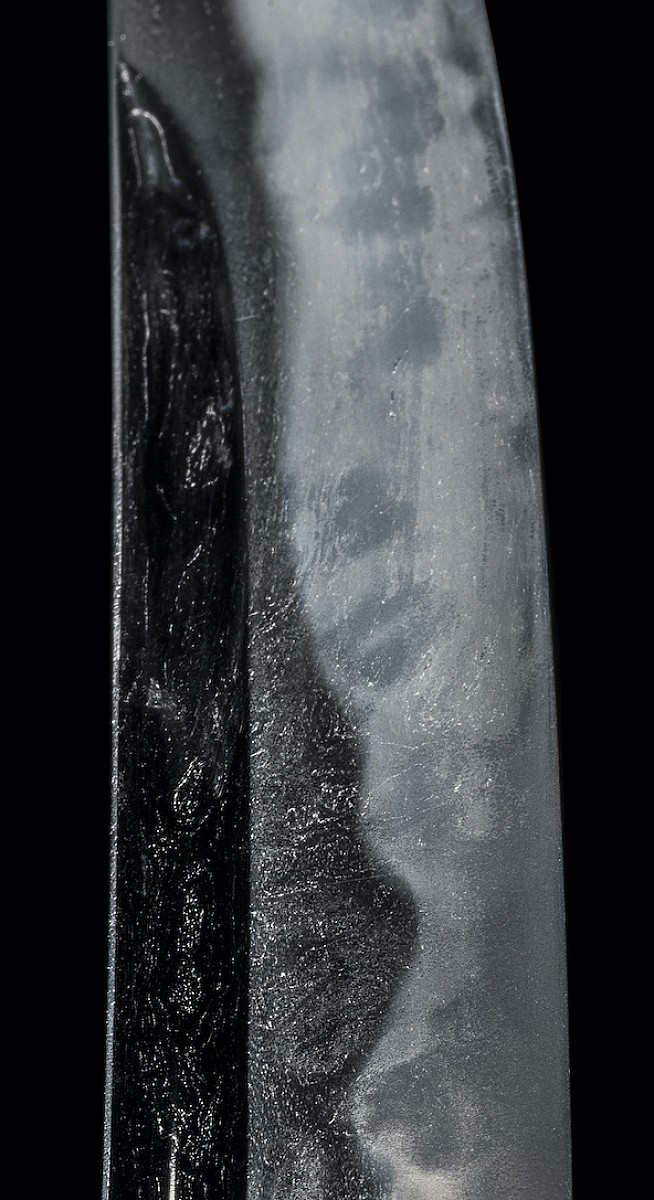 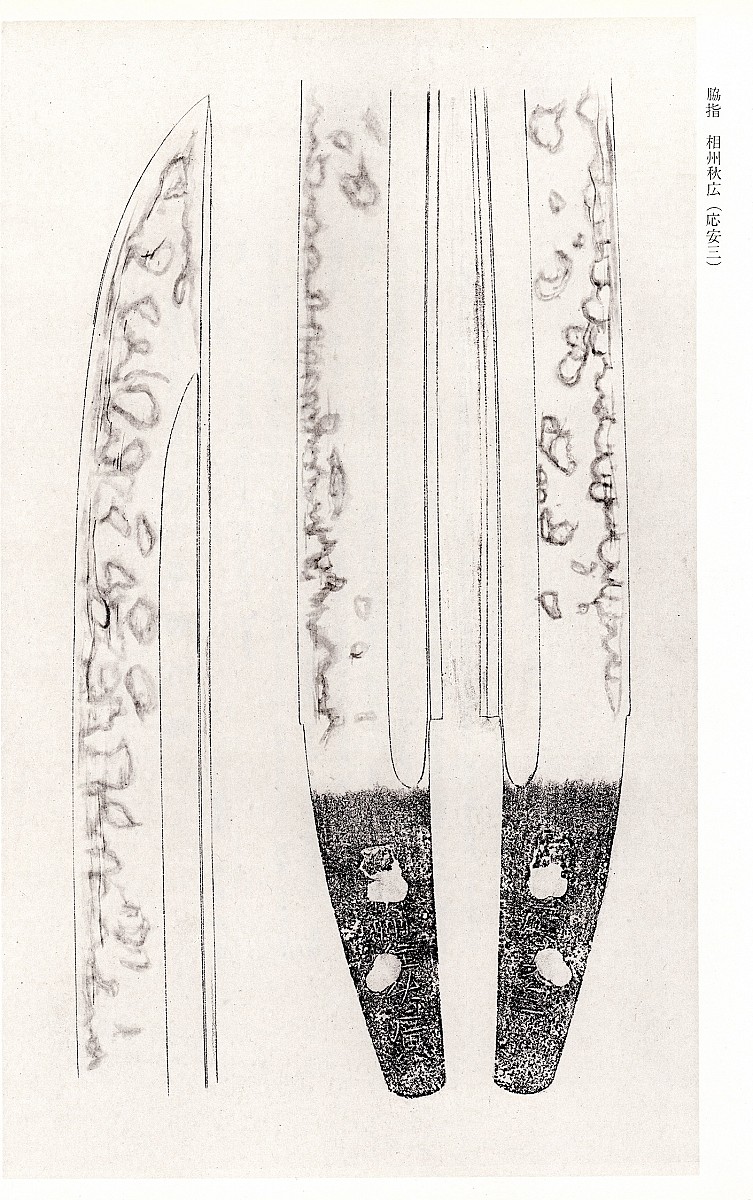 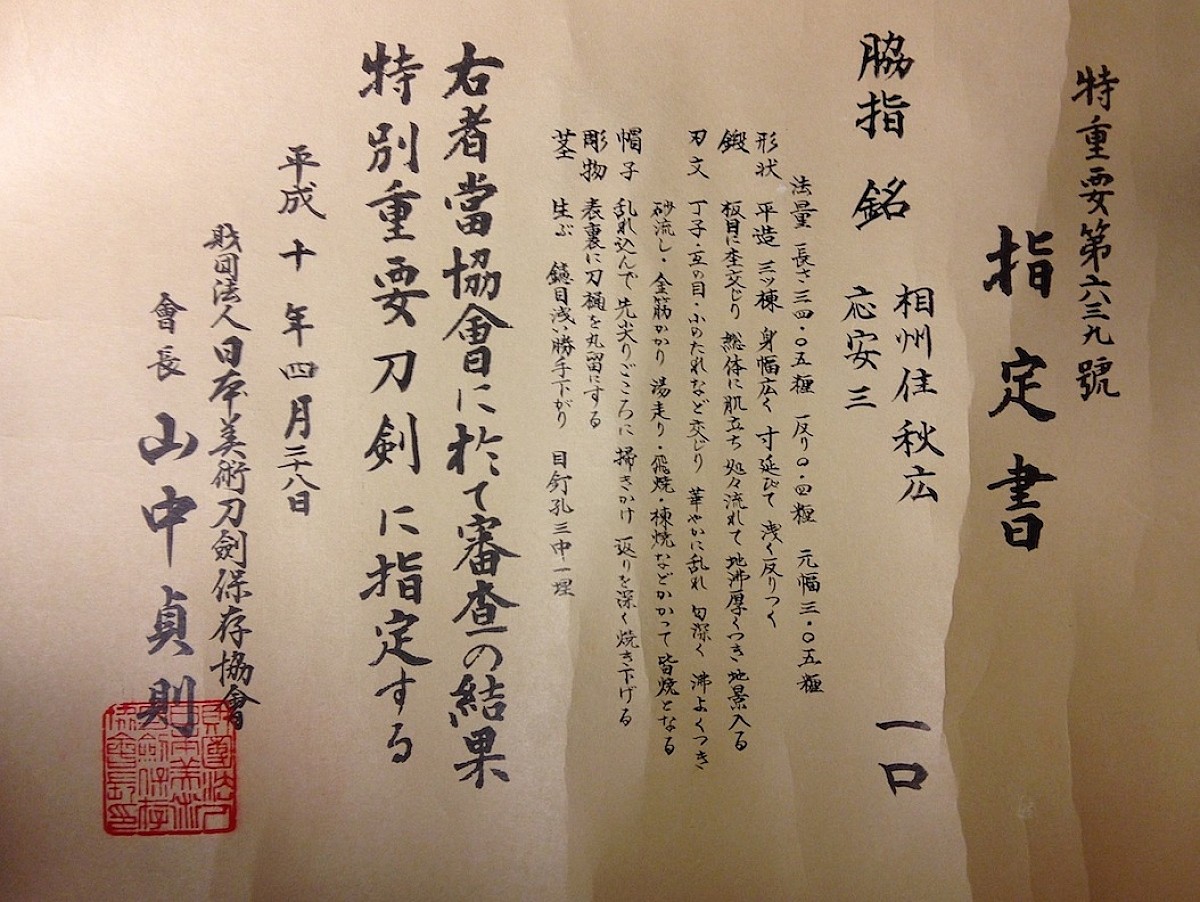 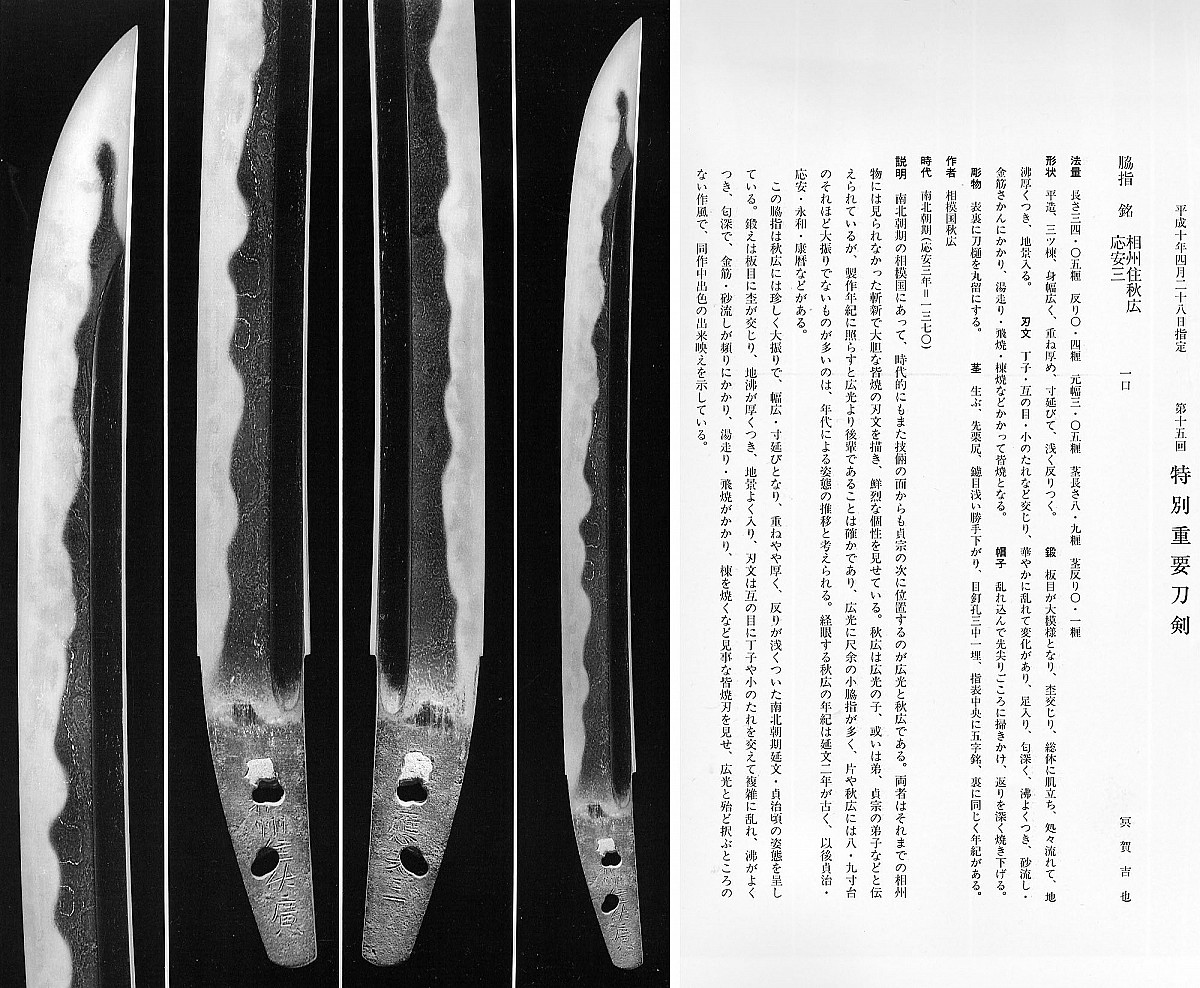 Designated as Tokubetsu Jūyō Tōken at the 15th tokubetsu-jūyō-shinsa held on the 28th of April 1998. 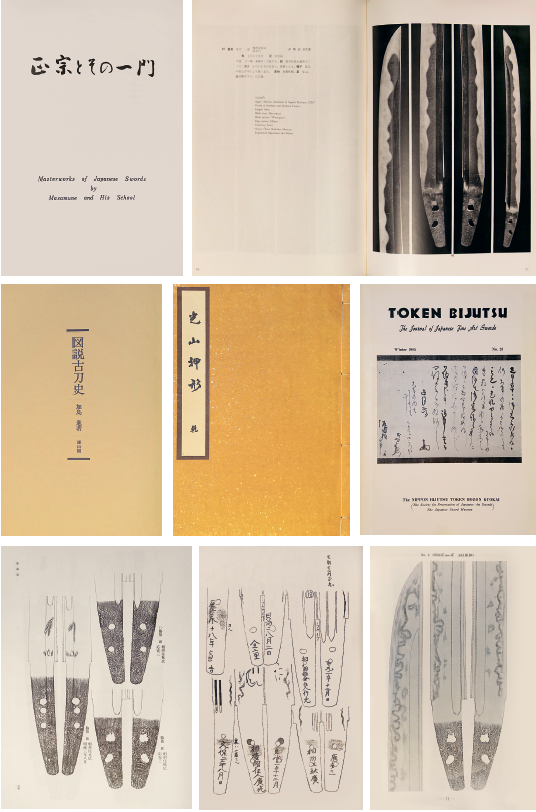 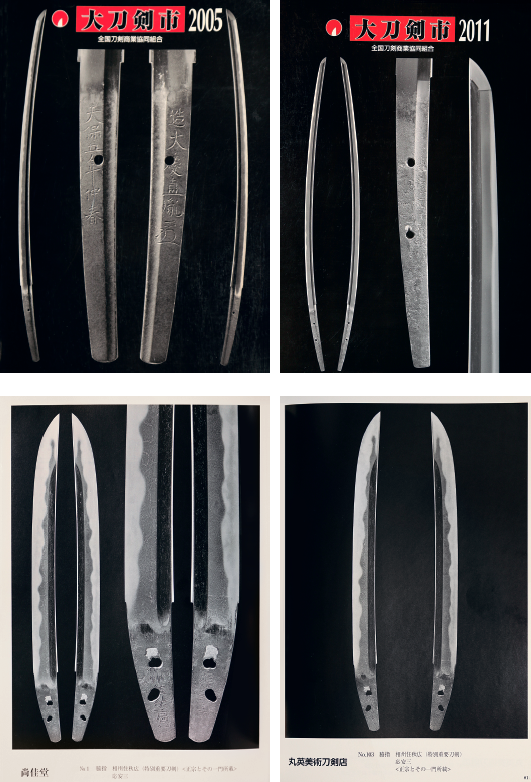 This sword is the most characteristic of Akihiro’s works and is rightfully considered one of his best and most powerful. It is deservedly called a “masterpiece.” This sword appeared in numerous publications in many famous books. The most significant of them, of course, is the book Masamune To Sono Ichimon (“Masterpieces of the Japanese Sword by Masamune and His School”) by Dr. Honma Junji, 1961. Information in this book about this sword by Akihiro appears on page 93. An interesting fact is that this book erroneously indicates the status of the sword as Jūyō Bijutsuhin. However, the Nihontō Jūyō Bijutsuhin Zenshū (日本刀重要美術品全集) has no information on it. It is not surprising that there was a little confusion here. This work impresses everyone so much that people are completely confident that it received any status it was submitted for. When Dr. Honma wrote his book, the ko-wakizashi was kept and exhibited in the Ōkura Shūkokan art museum. 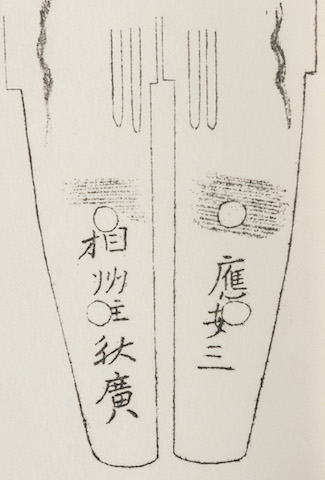 In addition to the sword previously being displayed in the museum, documents contain information about two of its previous owners: Ise Torahiko (伊勢寅彦, Tōkyō) and Myōga Kichiya (冥賀吉也, Tōkyō). These details refer only to modern times, however, because tracing the history of who possessed this outstanding and notable item from the times of Edo to the present day is impossible. The fact that this ko-wakizashi was known even in the Edo period is proved by the presence of its oshigata in the Kōzan Oshigata collection. It is very interesting that it has futasuji-hi on both sides and one mekugi-ana fewer. In general, horimono in the form of futasuji-hi is represented only in works of a very high level. No one knows why futasuji-hi was replaced by katana-hi on this sword, as well as the exact time when this change occurred.

“A blade by Akihiro with the date signature of Ōan three (1370), which bears as typical for this smith a goji-mei and a date signature, which mentions the year, without the month, and the day. In addition, the interpretation in a gorgeous and excellently tempered hitatsura corresponds with what is considered the strong point of this smith and so the blade has to be regarded as totally representative for him. Blade length ~ 34.0 cm, designated as Tokubetsu-Jūyō-tōken at the 15th Tokubetsu-Jūyō shinsa. Written on request by Tanzan Hendō [探山邉道, pseudonym of Tanobe Michihiro] in the eleventh month of the Year of the Snake (2013). Kaō.”

In this case, it is necessary to comment on the term 代表作 (daihyō saku) used in describing this sword by Tanobe sensei. The interpretation of this term, found in a conventional dictionary, is as follows: だいひょうさく, which can be translated as “a masterpiece, characteristic, representative work.” Thus, Tanobe sensei defined this sword as a masterpiece, unmistakably and unambiguously characterizing Akihiro as a master, who put all his skills and knowledge in his work. Drawing an analogy from the history of modern European art, we can say that the Pietà is a characteristic masterpiece of Michelangelo Buonarroti, unerringly identifying him as the artist and clearly demonstrating his inherent and unique level of skill. That is the exact meaning of the phrase Tanobe Michihiro used to describe this sword by Akihiro.