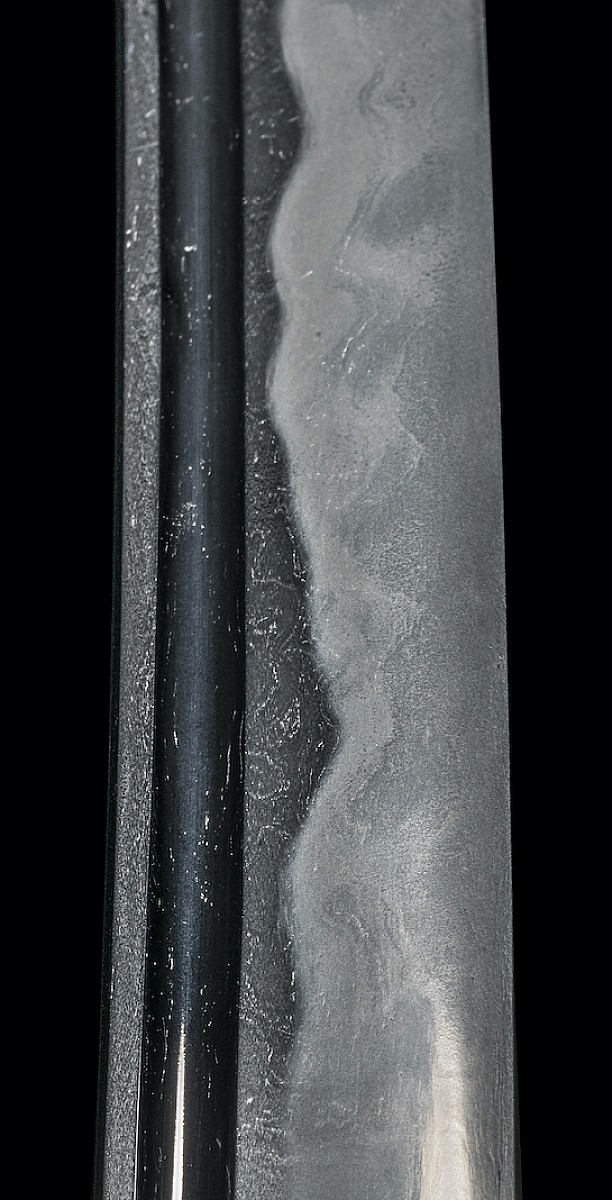 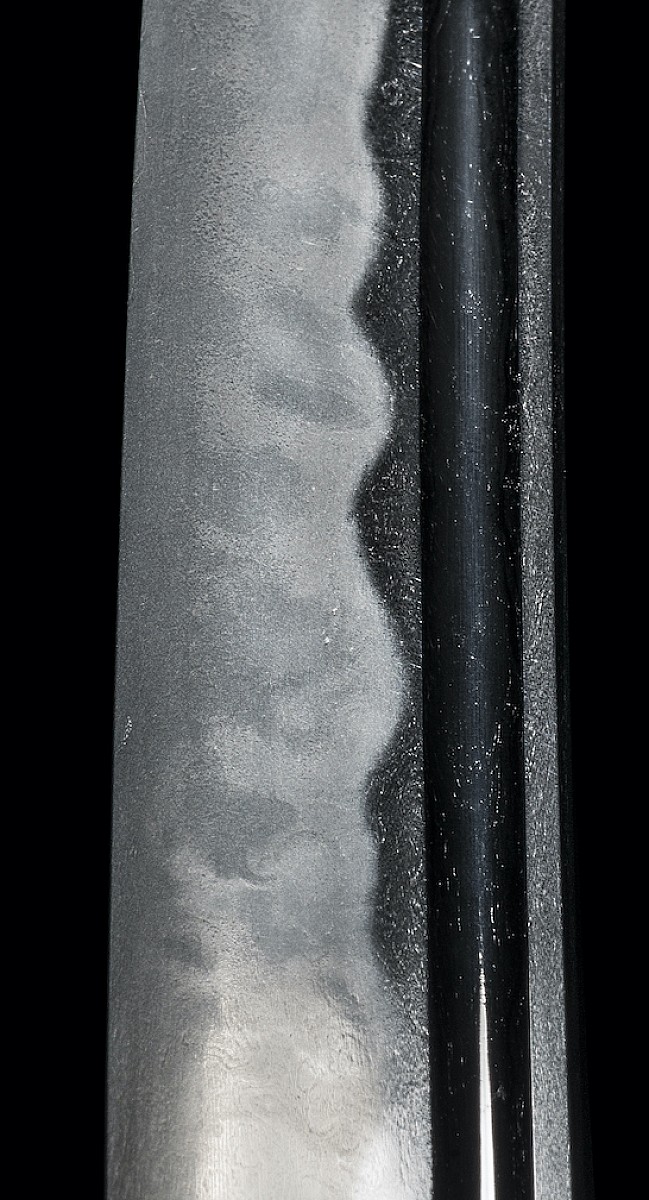 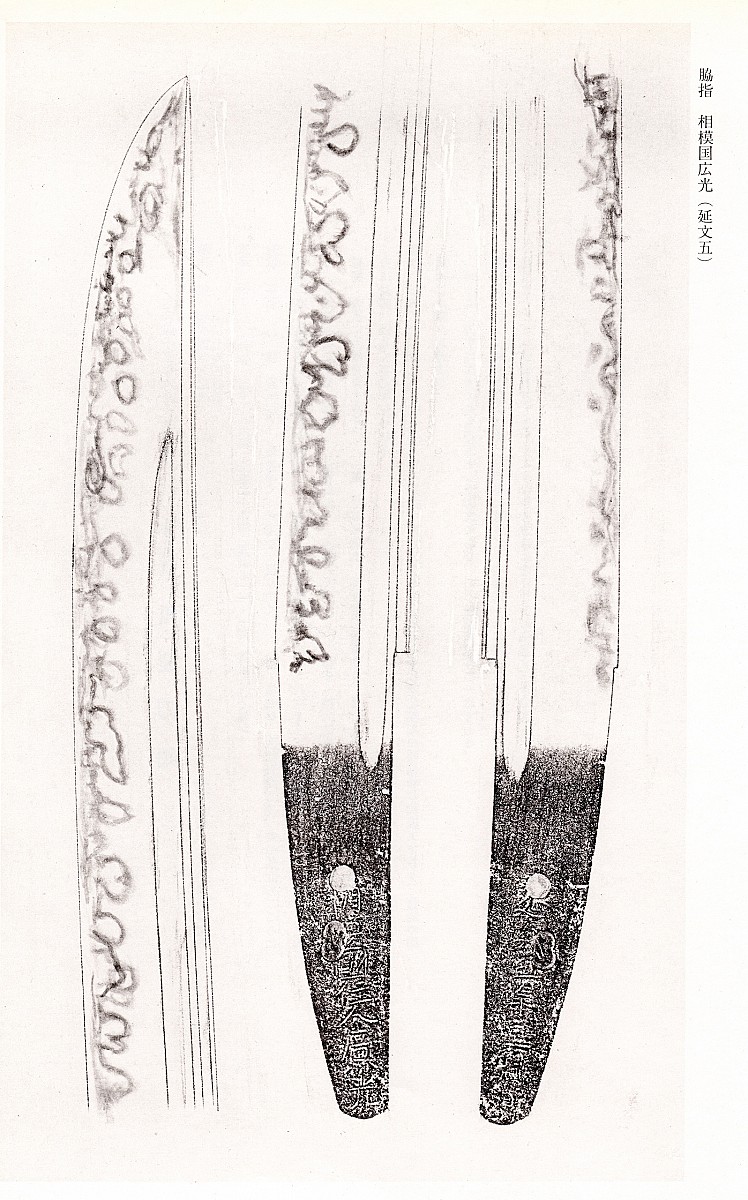 Tokubetsu Jūyō Tōken Hiromitsu Wakizashi: nagasa: 36.2 сm; sori: 0.5 сm; motohaba: 2.85 сm; nakago nagasa: 11.1 сm; nakago of the initial shape (ubu), a slightly raised (by about 5 mm) line of machi, signed as 相模国住人廣光 (inhabitant of Sagami, Hiromitsu), dated 延文五年三月日 (March 1360), polished by Tsukasa Saitō (born in 1953; the best disciple of Nagayama Kōkan [永山–光幹, 1920–2010]—Ningen Kokuhō [人間国宝]—Living National Treasure). The sword has a habaki consisting of two parts; on the exterior part, there is kiri kamon (桐家紋). The part of the habaki with mon is solid gold; the inner part of the habaki is made of a copper-based alloy and is gold-foiled. Provenance: Clan Ikeda (Bizen Okayama), Murakami Shintarō (村上慎太郎), and Koizumi Tomitarō (小泉富太郎).

Designated as Tokubetsu Jūyō Tōken at the 18th tokubetsu-jūyō-shinsa held on the 12th of March 2004. 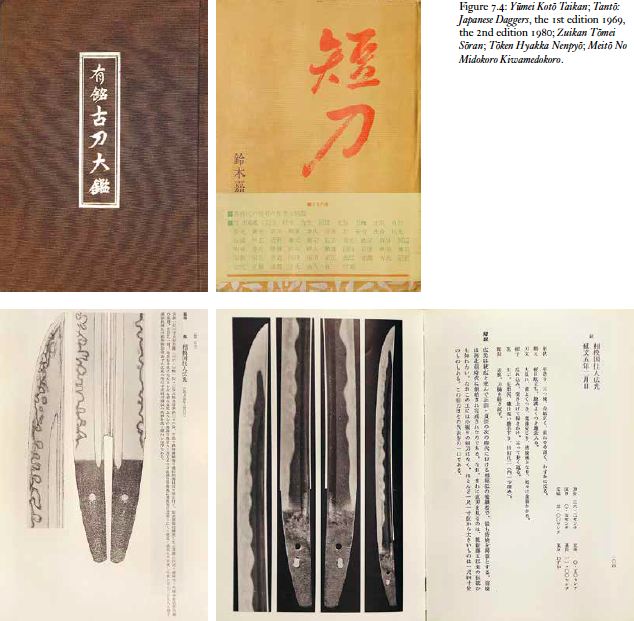 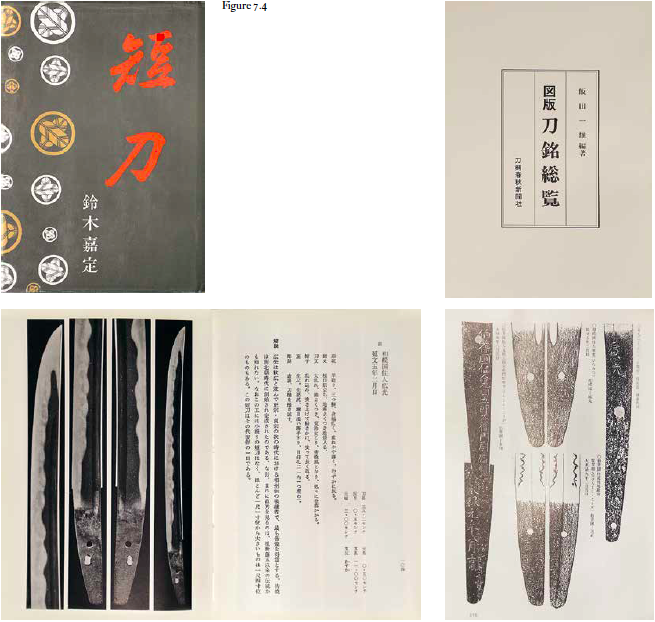 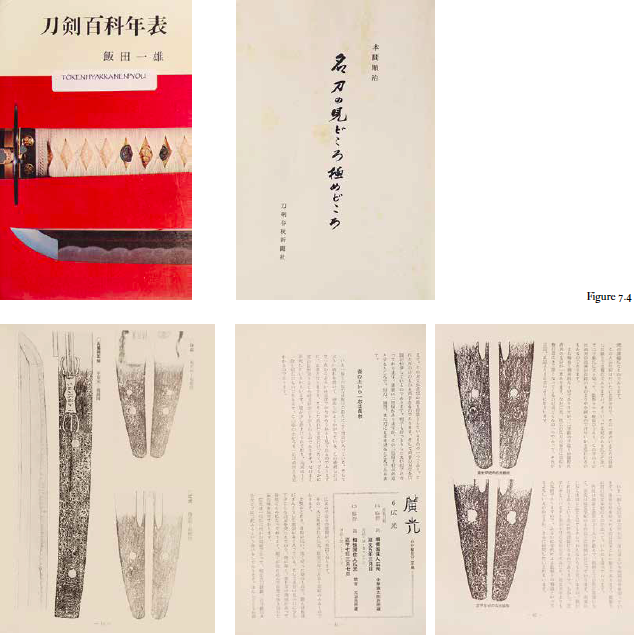 This sword is one of the best and most beautiful works by Hiromitsu. It is very similar to another sword by the same master, having the status of Jūyō Bunkazai (with a 32.1-cm nagasa, dated 1356), but this one is 4 centimeters longer and, because of this, looks much more elegant. The sword belonged to the collection of a daimyō, which ensured high standards of preservation and good-quality storage. As a result, the sword was preserved in its original form with a minimal number of polishings during its entire lifetime. The highest degree of preservation and the quality of this work, as well as the length of the sword, made it very famous in the past and in the present. This is evidenced by numerous publications and references in books that feature classic studies of Japanese swords. The manufacturing date specified on the tang indicates that the sword was made in the late period of Hiromitsu’s activity, at the peak of his creative abilities, which he successfully applied in this work.

<.....> Using this sword as an example, we can see certain features of the signature that are characteristic of the masters of the Sagami School in the Kamakura period and the early Nanbokuchō. They tried to sign their works with light, fine strokes of the chisel, to cause as little damage as possible to the tang. Thus, they could minimize the risk of breaks and cracks during actual combat. At the same time, the signature itself was located as close as possible to the tang end and as far as possible from the machi—that is, from those areas where impact loads are still possible. This fact is most likely explained by better feedback among smiths at that time and greater attention to warriors’ demands. Masters of the Shintō era had a much more liberal attitude to signatures, having made them more detailed and longer, which gradually even evolved in a special kind of art.

From the documents accompanying the sword, we can identify the names of some of its former owners, who stored it in their collections. In addition to representatives of the Ikeda clan (as described in the chapter “Yukimitsu”), the sword was owned by one of the most famous Japanese collectors: Murakami Shintarō. It was also stored in the collection of a great expert in the field of nihontō and the Sagami School: Koizumi Tomitarō (小泉富太郎 1921–2008). Koizumi san was a vice mayor of the city of Yokohama, the executive director of NBTHK, and the head of the NBTHK branch in Yokohama. He was the author of Volume 1 and a coauthor of Volume 4 of Nihontō Zenshū (1966), as well as the author of a series of articles titled “Masamune and His Disciples” in the English version of the Tōken Bijutsu revue (1979–1980).

The sword was stored in a new shirasaya without sayagaki. Unfortunately, the old shirasaya has not survived. The existence in the past of a sayagaki with a more detailed record, which was made in the Meiji period and according to which the sword was owned by the Ikeda clan, is confirmed by the fact that at both Jūyō and Tokubetsu Jūyō shinsa, the sword was presented by Koizumi Tomitarō himself. Both NBTHK documents indicate the provenance of the sword from the Ikeda clan. Most likely, experts concluded this from the reference to a document mentioned in the sayagaki on the old shirasaya. The lack of the old shirasaya for such an important and carefully stored sword would have been possible only if the former owner had kept the old one as a keepsake when selling the sword. It should be noted that we also know of numerous cases where former owners kept Hon’ami origami separately from the sword.

This Tokubetsu Jūyō Hiromitsu is a very important item when studying the smith craft of the Sagami School. It occupies a special place among notable pieces of art. It can also be considered valuable reference material, due to the presence of the signature, the date, the ubu nakago, the length, and its extremely good preservation, although 660 years have passed since its manufacture. Suzuki Kajō (鈴木嘉定), in his book Tantō: Japanese Daggers, mentions that this sword is an especially typical work by Hiromitsu and, even more significant, this sword is one of the longest ko-wakizashi forged by the master.

The new one publication in book of Tokubetsu Jūyō Hiromitsu Ko-Wakizashi was found recently. This oshigata was made in very flamboyant manner by Kondo Kuniharu (近藤邦治) and exposed on the Exhibition of Japanese Sword Oshigata held from 18.04.2020 to 28.06.2020 in The Ieyasu and Mikawa Bushi Museum (Okazaki). This oshigata was exhibited without a sword. 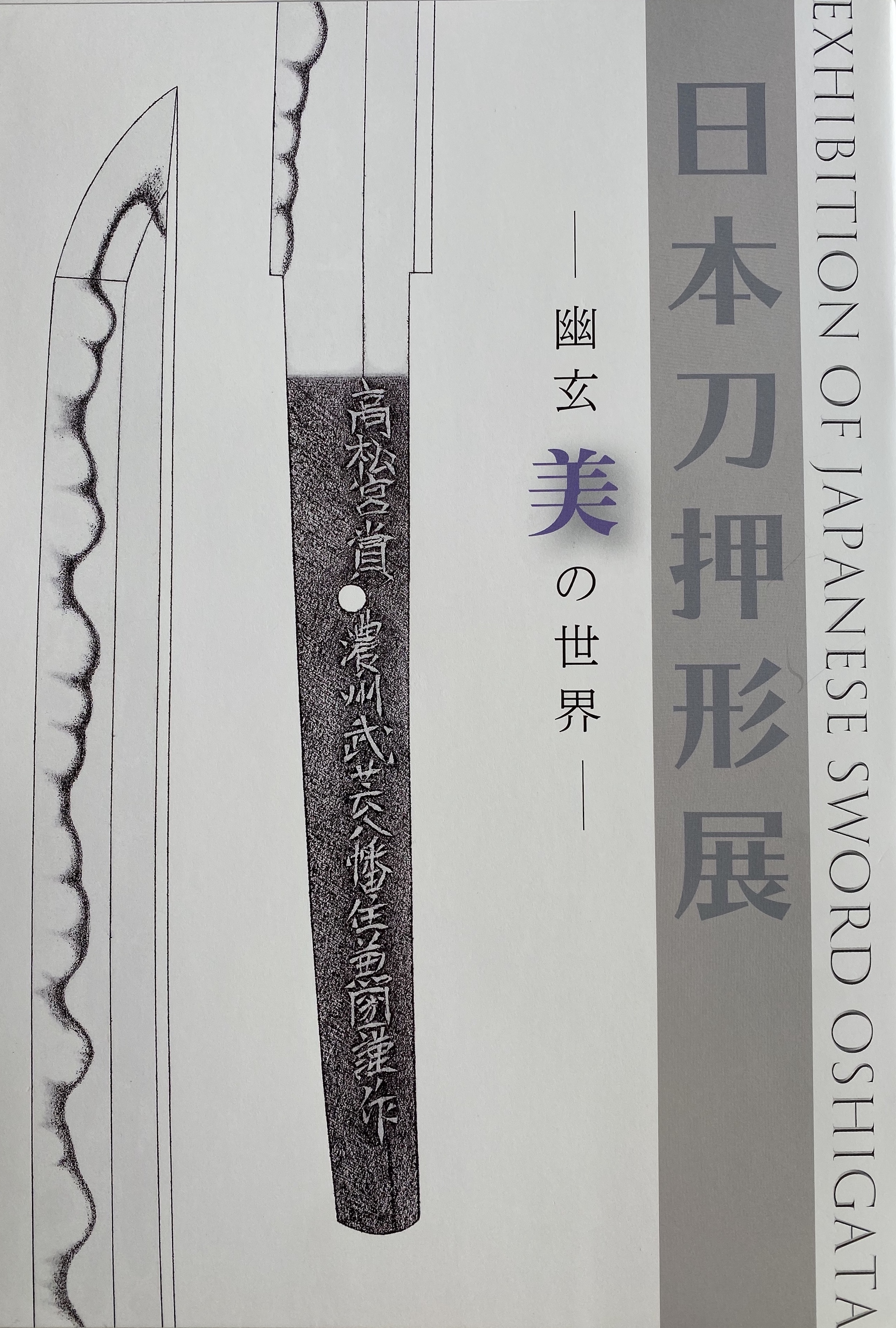 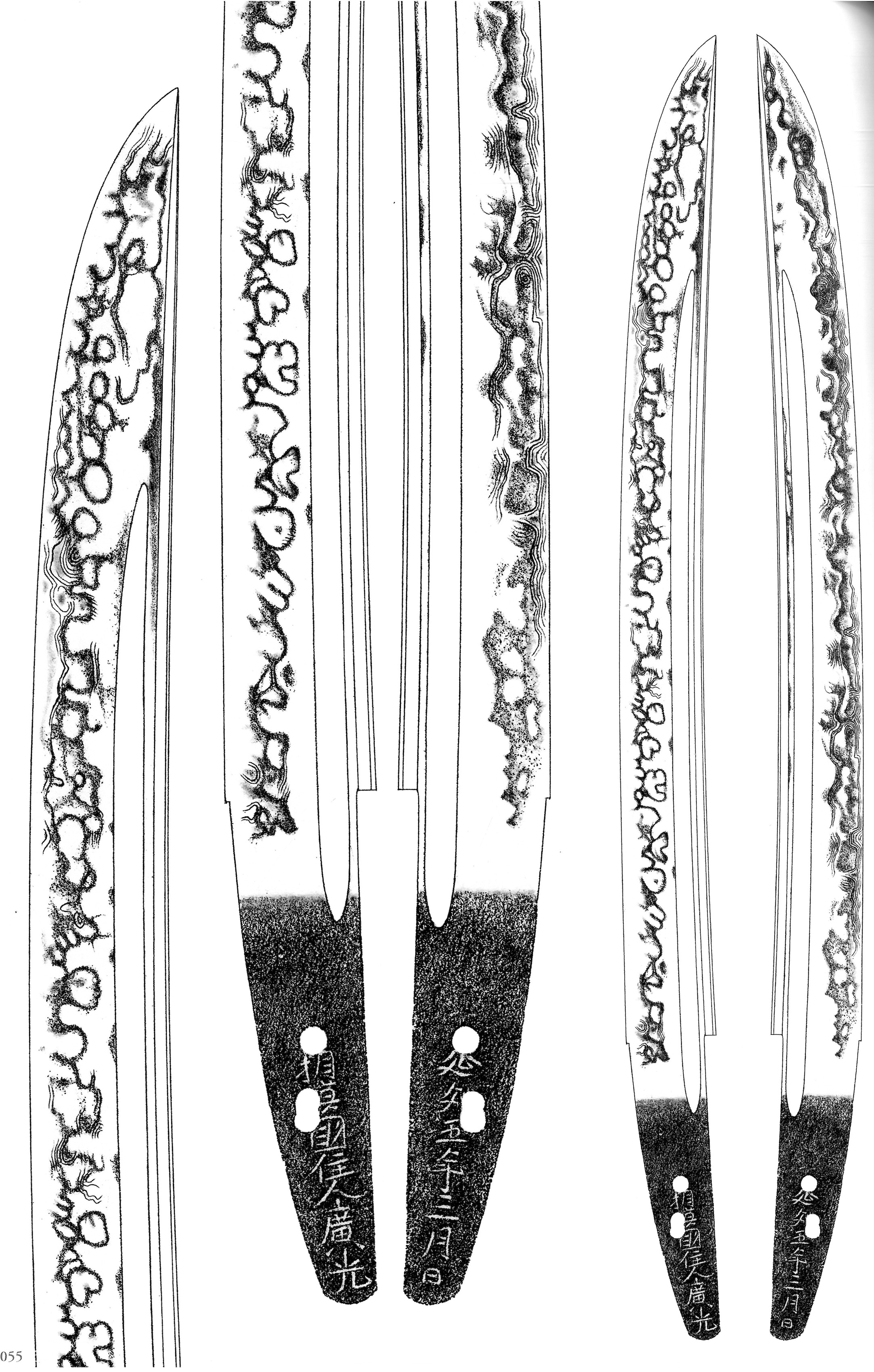