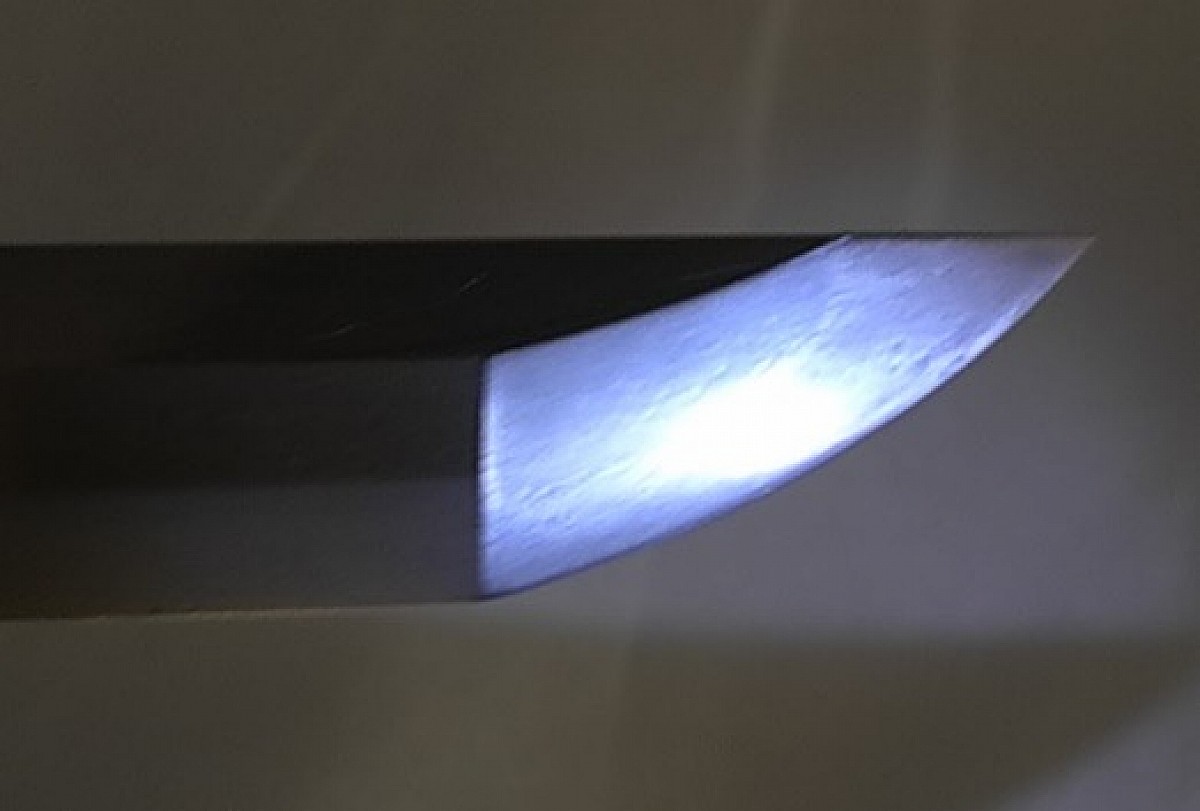 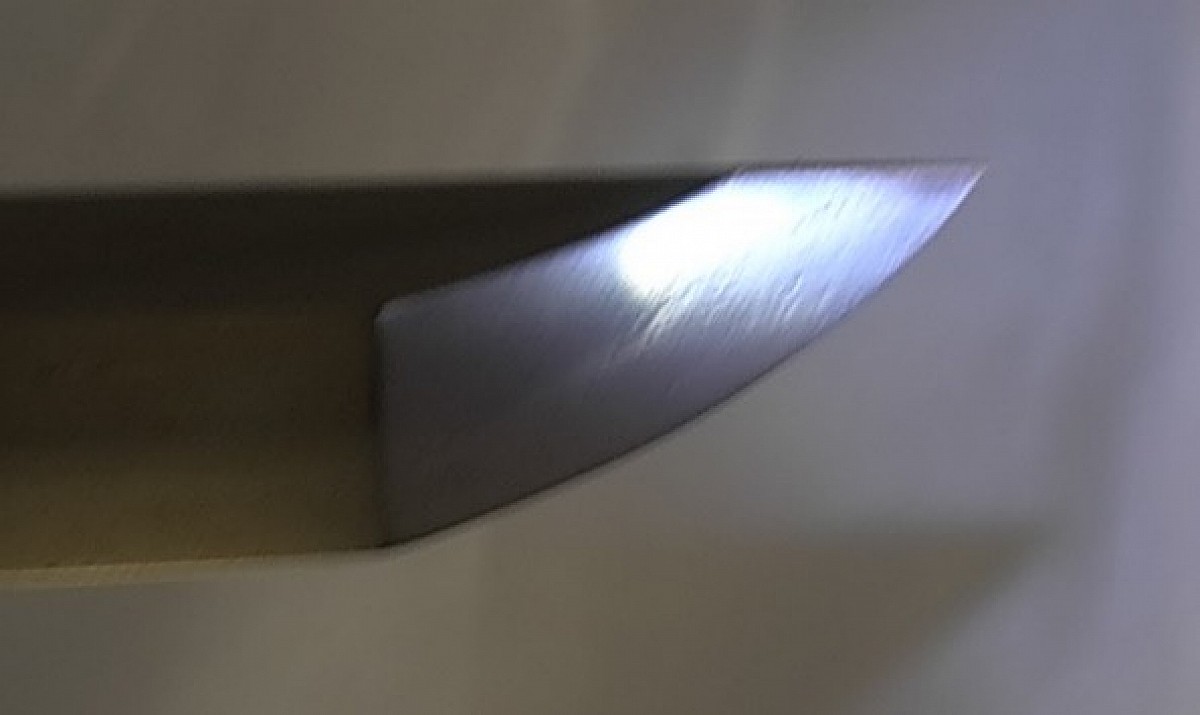 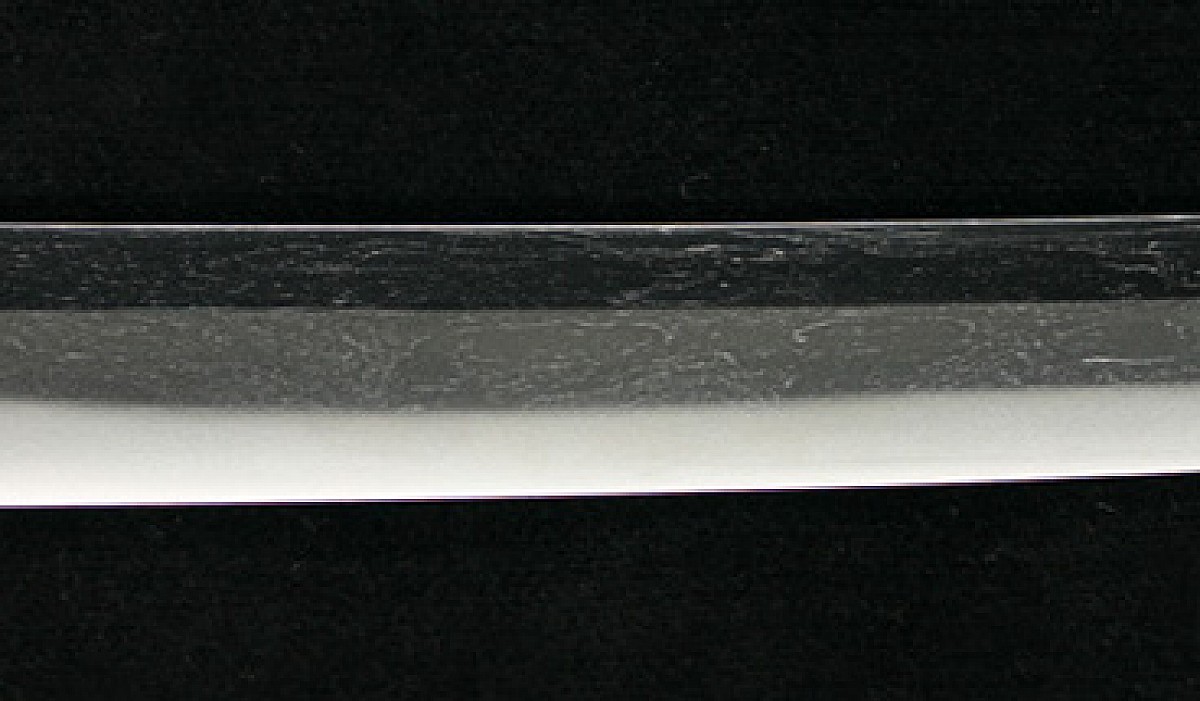 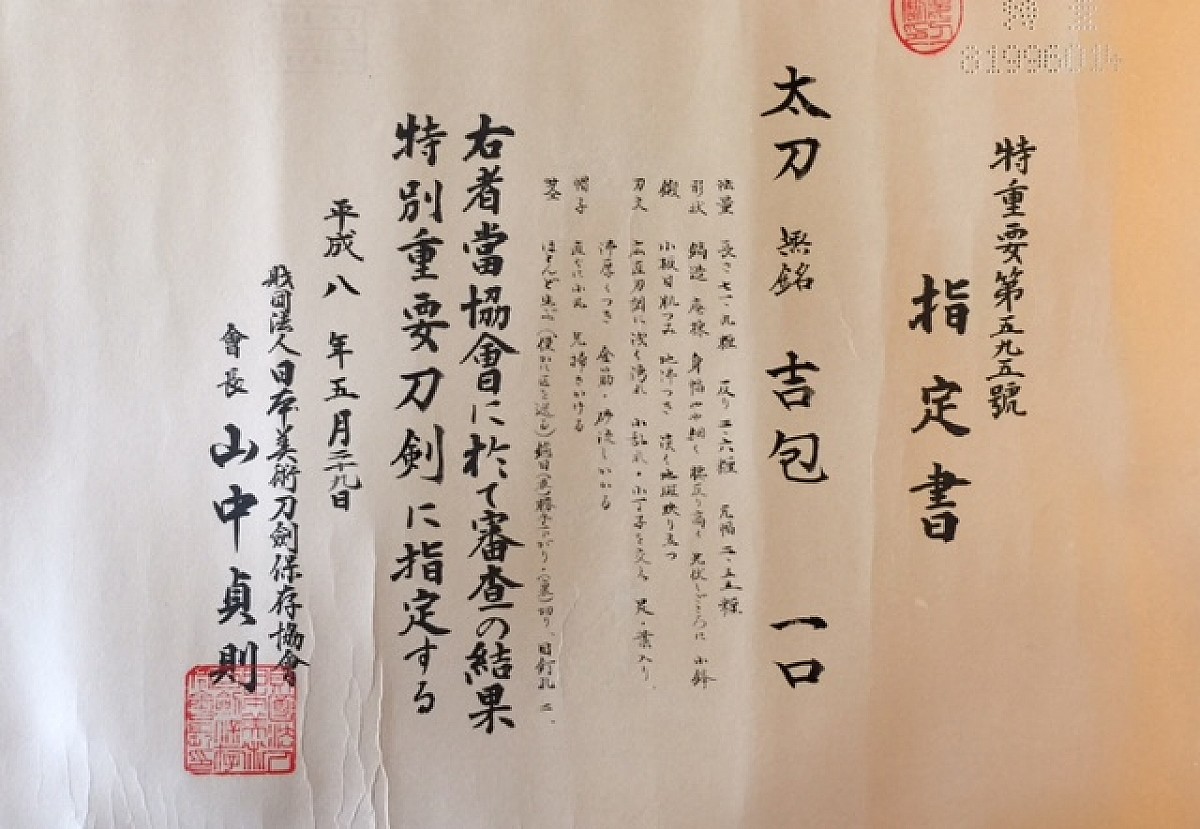 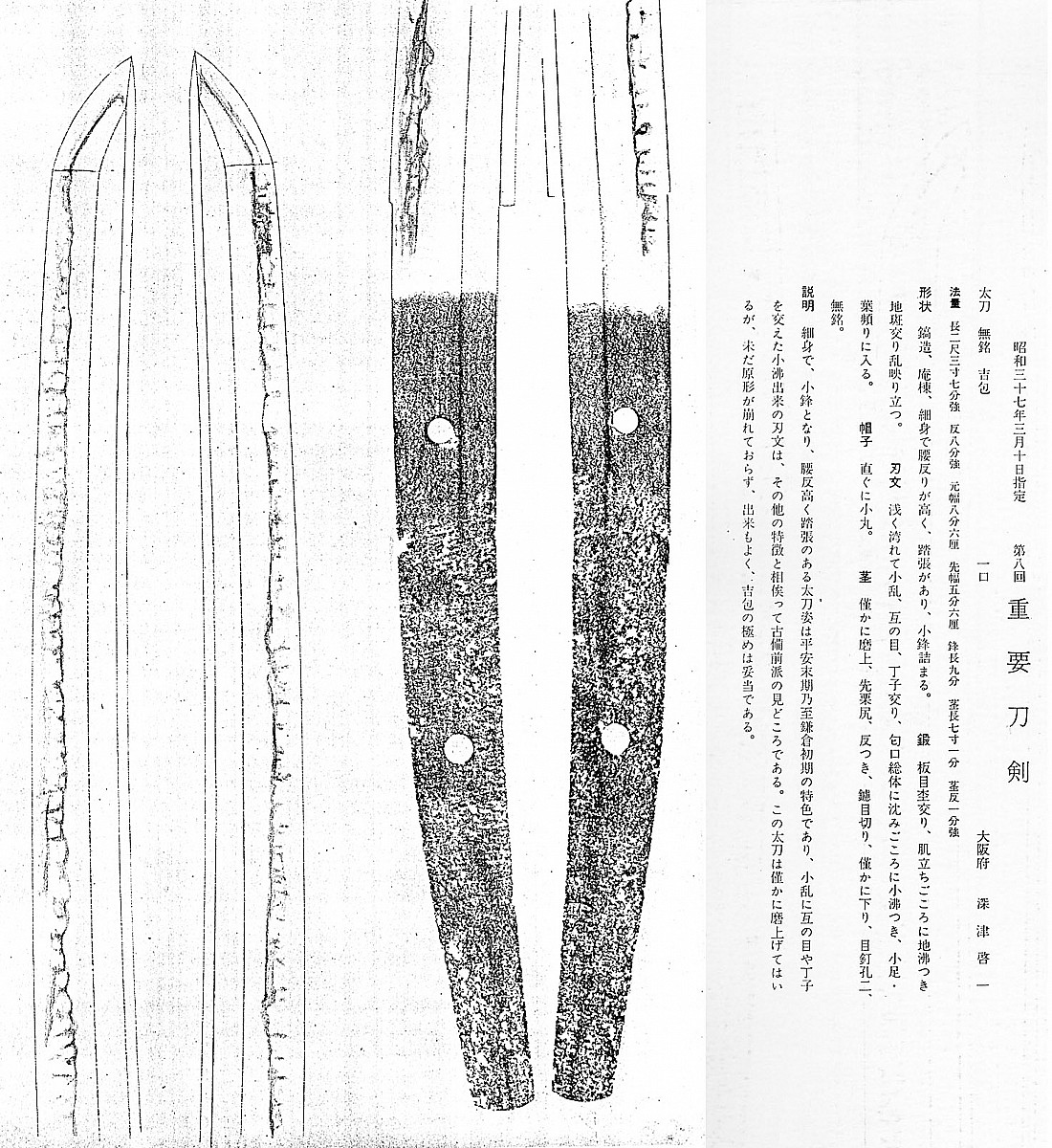 The Ko-Bizen School is one of the most important and famous school of Japanese smithing art originated from the Heian period (平安, 794-1185) and continued into Kamakura period (鎌倉, 1185-1333). The Ko-Bizen School has many relationships with the Ko-Ichimonji School, and this is especially manifested in the similarity of styles and names of swordsmiths. In the same quite short time period from a historical point of view, a lot of masters with the same smithing names worked. Historically, Ko-Bizen is the oldest among all Bizen schools. According to one theory Sanenari (実成), which was indicated to have been active around the Tenryaku era (天暦, 947-957), was the founder of the Ko-Bizen School.

Yoshikane was the grandson of Sukekane and the son of Nagakane. There are some old historical documents that indicates Yoshikane’s period of artistic activity as Eishō (永承, 1046-1053) and Tengi (天喜, 1053-1058) eras. The Yoshikane’s genealogy can be presented in the following form:

We can find the following notes about Yoshikane in the Nihon Toko Jiten by Fujishiro, translated by Harry Afu Watson, vol. "Kotō", p. 61. "The problem is that the same name is in Ko-Bizen and Ichimonji. "Ko-Bizen Yoshikane" is often heard, but "Ichimonji Yoshikane" is not heard very often. In the event the name is Yoshikane, human nature is to unconditionally make it Ko-Bizen. It is reasonable to consider it Ko-Bizen in the event the hamon is ko-midare nie tsuki, or to regard it as Ichimonji in the event it is chōji ha nioi deki, but there is a Tomonari with a Katei nengo (1235), and on the Yoshikane to the right with the large signature there is a Kenchō nengo (1249), and even though it is a blade in the style of Ko-Bizen, it becomes impossible to say that it is before Genryaku (1184)."

It's amazing that Yoshikane’s sword has gone through more than nine centuries of battles and conflicts. Speaking of such concepts as a thousand years, it is usually difficult for the human brain to imagine how many generations have owned this sword and how many people should be thankful for keeping this beautiful sword in good condition to this day.

As of today, 45 swords are known (NBTHK Jūyō and above) to be Yoshikane’s work. Of all his works known to us, 3 swords (2 signed) are Jūyō Bunkazai; 7 swords (3 signed + 1 orikaeshi mei) are Tokubetsu Jūyō Tōken; and 29 (4 signed + 1 orikaeshi mei + gaku mei) are Jūyō Tōken. Another 6 swords (4 signed) were awarded Jūyō Bijutsuhin status in their time. Few of those works are swords with nakago ubu: only 4 from all categories. 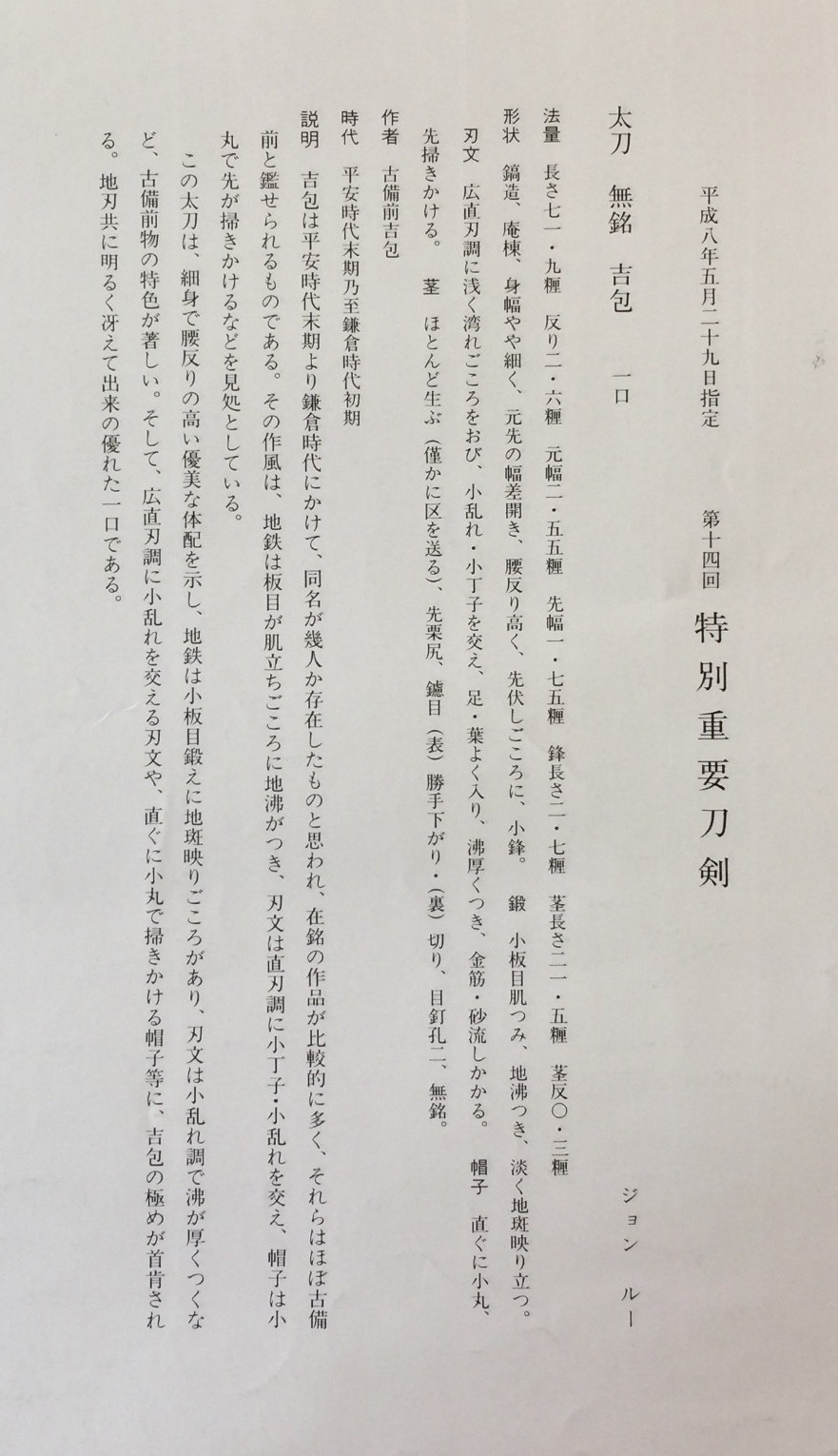 Nakago: Ubu (there is just a very little machi-okuri), kurijiri yasurime that are katte-sagari on the omote side and kiri on the ura side, two mekugi-ana, mumei.

time of production: End of the Heian period.

Explanation: It is assumed that from the end of the Heian to the early Kamakura period, there were several smiths with the name Yoshikane were active of which relatively many signed works are extant and which all can be classified as Ko-Bizen smiths. Highlights of their workmanship are a somewhat standing-out itame with ji-nie, a suguha-chō hamon mixed with ko-chōji and ko-midare, and a ko-maru bōshi with hakikake at the tip. This tachi has a slender mihaba and a deep koshizori and is thus of a highly elegant shape. The jigane is a ko-itame with a faint jifu-utsuri and the hamon is nie-laden and features ko-midare. Therefore, we clearly recognize a Ko-Bizen workmanship and the hamon being arranged as hiro-suguha-chō ending in a sugu-bōshi with a ko-maru-kaeri with hakikake, we have a high confidence to attribute this blade to Yoshikane. The blade is of an excellent deki and has a bright and clear jiha. 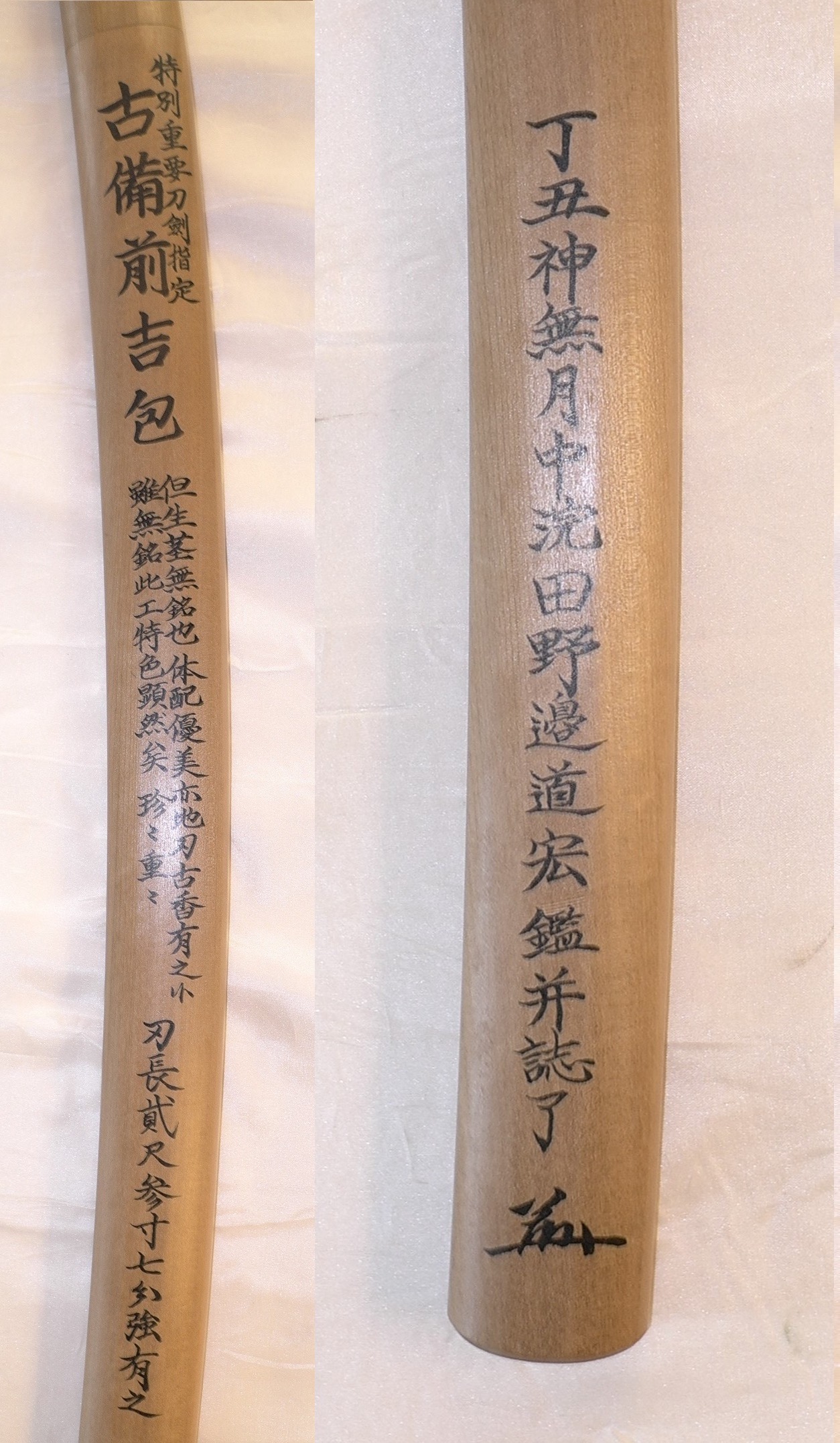 Designated as Tokubetsu-juyo from the 14th Tokubetsu-juyo Shinsa. Ko-Bizen YOSHIKANE. This sword has an ubu-nakago and is mumei and in terms of its elegant shape and its outstandingly healthy and well preserved jiha, it shows very well the characteristic features of the smith Yoshikane. Very rare, very precious. Blade length - Nagasa – 71,90cm. Examined and Written by Tanzan Hendo (pseudonym of Tanobe Michihiro) in mid-october of the year of the Ox (1997) + kaō.

Double-pieces habaki for this sword was made with implementation of the paulownia kiri mon. 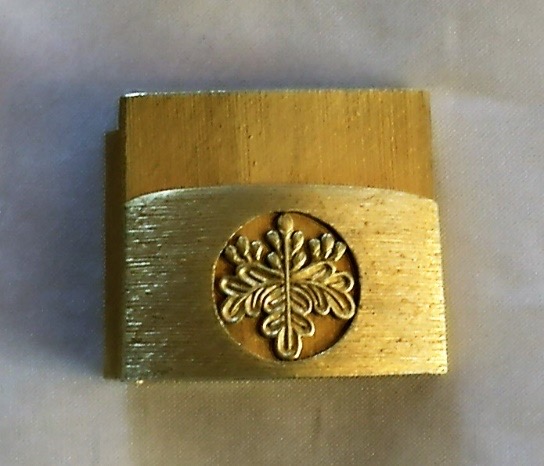 According to ancient Chinese legend the mythical phoenix bird only appeared in the paulownia woods during the coronation of a new emperor. This appearance blessed the reign of the new emperor. From this auspicious association the paulownia was held in esteem since ancient times. The paulownia, phoenix, and bamboo on which the phoenix fed when he ventured to earth, were boldly depicted on the court robes of the emperor and his retinue during the early Heian period. These designs distinguished the emperor and his court on many of the scrolls of this period.

The use of the paulownia became very fashionable in the Kamakura period. Ranking second only to the chrysanthemum, the paulownia was exclusively associated with the Imperial Household by the time of Emperor Go-Daigo (後醍醐天皇), who conferred its use on Ashikaga Takauji. In time, Takauji ordered its use by his clan. 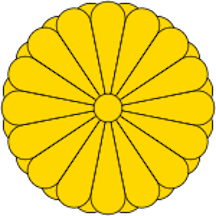 Later, Oda Nobunaga and Toyotomi Hideyoshi conferred it on their generals for brave and faithful service. The paulownia graced the roofs of the great castles of Himeji, Osaka, Nagoya, and Fushimi which Hideyoshi built. After his death, the popularity of this mon declined but its use was perpetuated by the Daimyo and Hatamoto of the Toyotomi time. 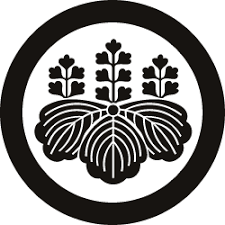 This Mon is the one of the Ashimori Daimyo in Bitchu province. "Kinoshita Iesada (木下家定, 1543 – October 4, 1608) was a samurai of the Sengoku through early Edo periods. He was the son of Sugihara Sadatoshi. Born Sugihara Magobei (杉原孫兵衛), he later took the new family name Kinoshita ("under the tree"), possibly to show his support for his brother-in-law, the general who would become known as Toyotomi Hideyoshi. At the time of the Battle of Sekigahara, Iesada was lord of Himeji han and held 25,000 koku of income. However, due to his distinction in guarding his sister O-ne (Hideyoshi's wife), Tokugawa Ieyasu rewarded him, and he was enfeifed at Ashimori han in Bitchu Province following the battle. Iesada's children included Katsutoshi, Toshifusa, Nobutoshi, Toshisada, and Hideaki, succeeded him." (source: https://en.wikipedia.org/wiki/Kinoshita_Iesada)