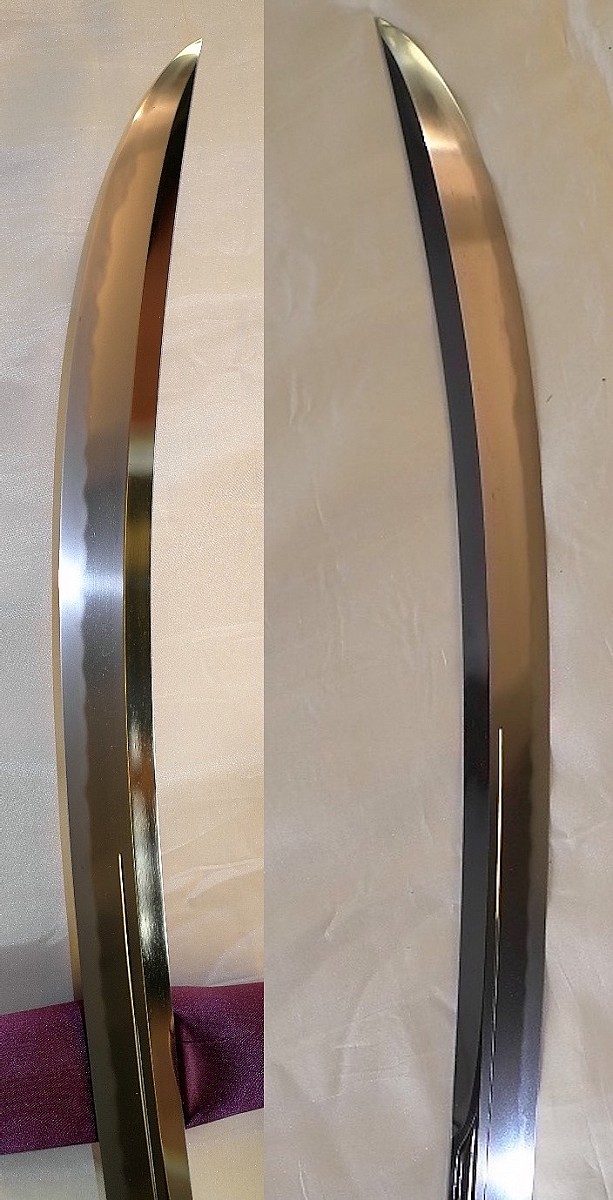 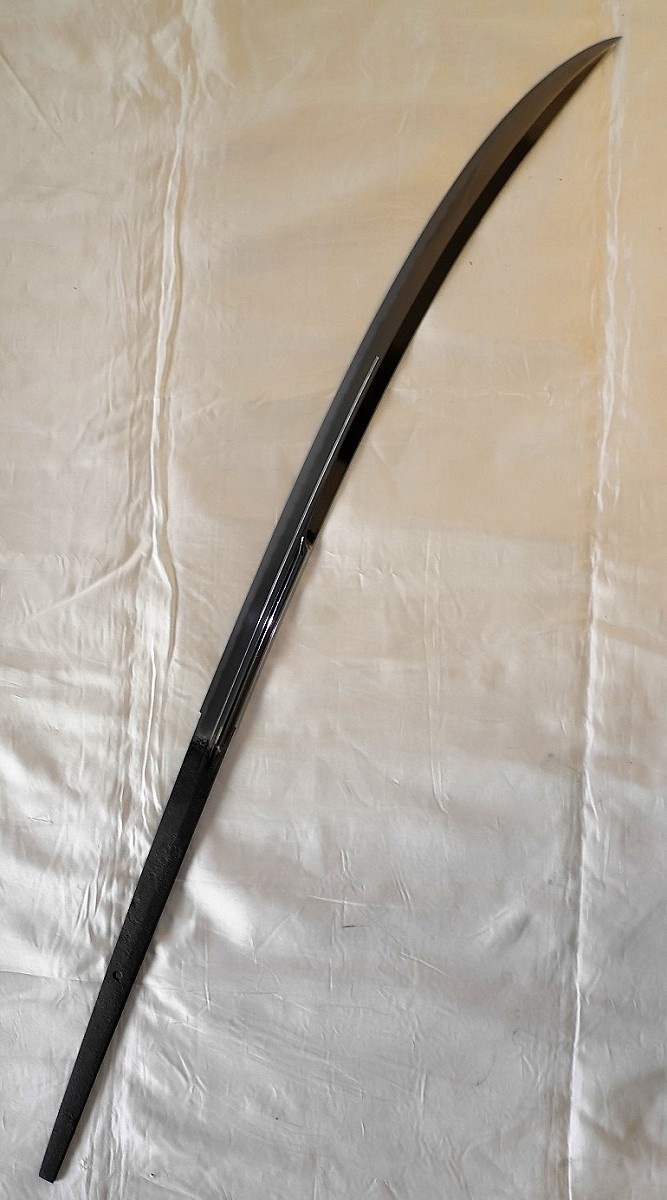 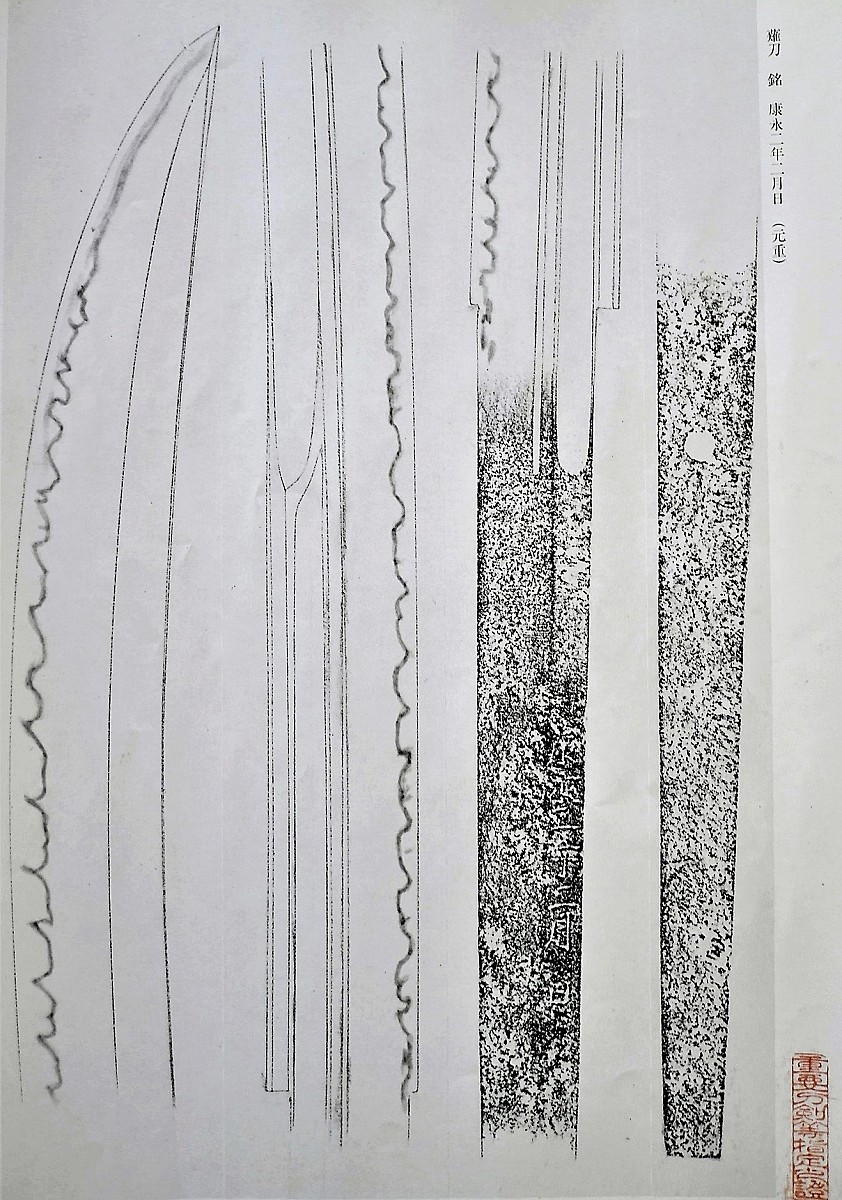 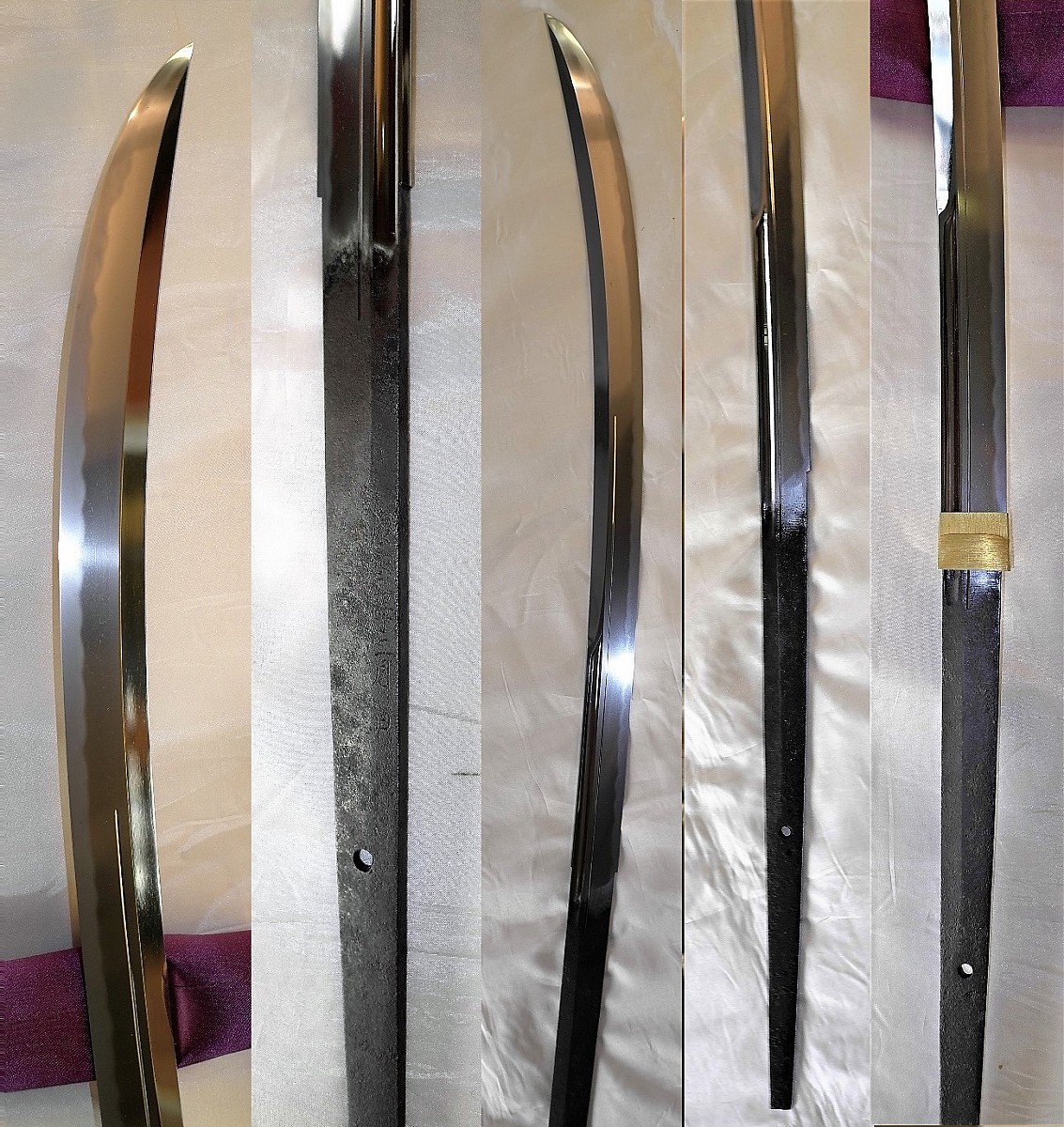 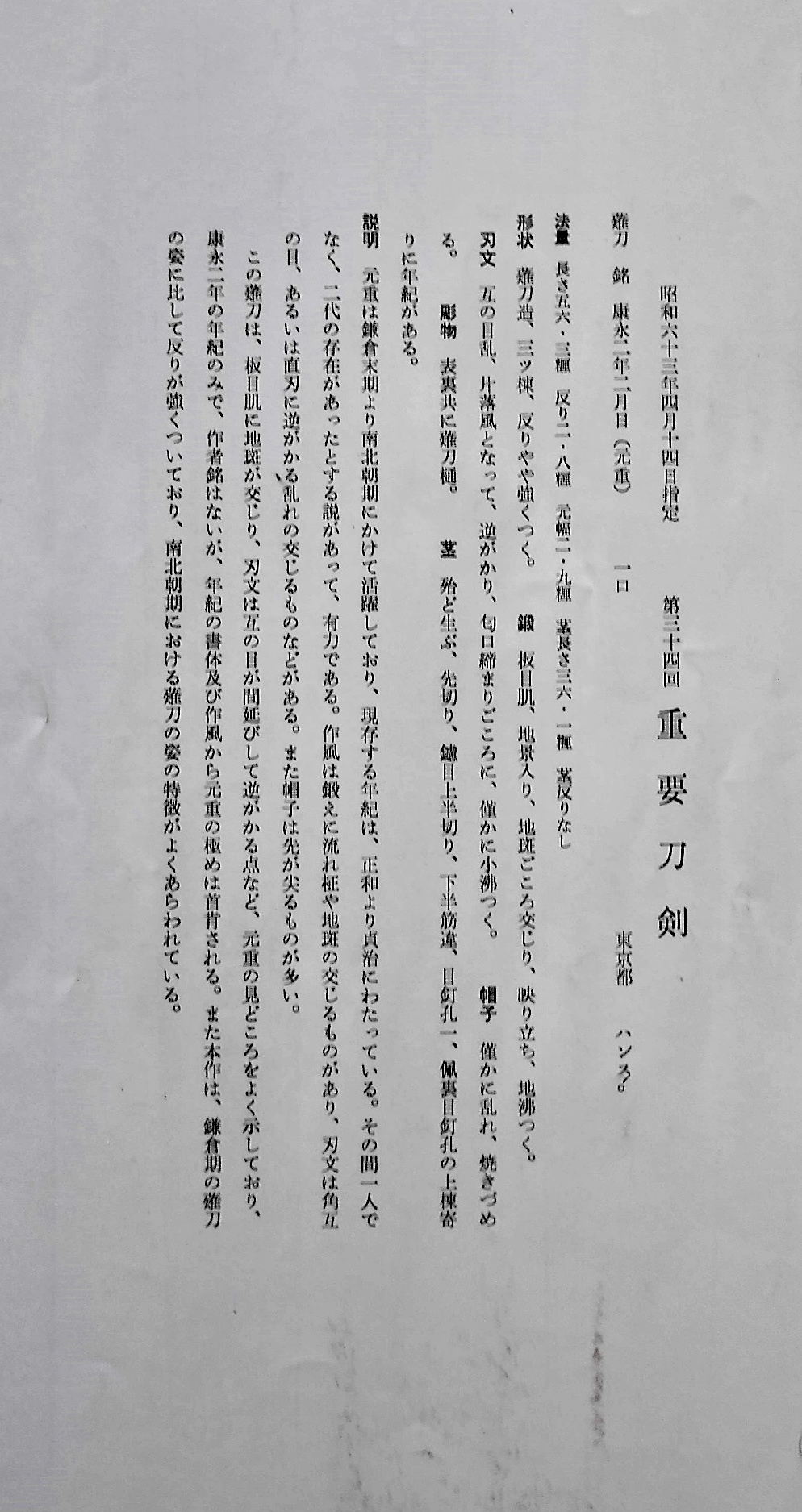 NAGINATA (薙刀), mumei: attributed to Bizen no Kuni Osafune MOTOSHIGE; Dated: on the 2nd year of the Kōei era (康永, 1343).

Sugata: The blade is made in naginata-zukuri shape, with mitsu-mune, and a rather strong sori.

Horimono: There are naginata-hi on both sides of the blade.

Nakago: The nakago is almost ubu, saki kiri, with yasurime which are kiri in the upper part and in the lower part sujikai. There is one mekugi-ana. The date nenki is chiseled above the mekugi-ana on the haki-ura side close to the mune.

Explanation: Osafune Motoshige formed with Kanemitsu and Chōgi an individual lineage of swordsmiths. According to dated swords extant of today, the beginning his artistic period can be determined at least from the late Kamakura Shōwa era (正和, 1312-1317) and up to the middle Nanbokuchō Jōji era (貞治, 1362-1368). Within this period of time, there were exists the theory of the two generations of Motoshige were active. Compared to the contemporary Osafune main-line, Motoshige’s workmanship shows a jigane with mixed in jifu or running masame, and saka-ashi, yō and other conspicuous hataraki within the ha. Further, his bōshi has a pointed tip and the jiba shares some same spirit with the Aoi school, which can be regarded as his respectively lineages characteristics. This naginata has itame-hada mixed with jifu. The hamon has gunome interspersed at longish intervals with saka elements, showing the characteristics of Motoshige’s workmanship. Interestingly, this sword is dated on the 2nd year of the Kōei era (1343) without the signature of the smith. However, if we will observe with attention the style of chiseling of the date and the overall workmanship, hence the attribution to Motoshige is very convincing. This blade has a strong sori, compared to those from the Kamakura period. The characteristics of naginata of the Nanbokuchō period are well expressed in this sword.

Designated as Jūyō Tōken on 34th jūyō tōken shinsa; Bizen (no) Kuni Osafune Motoshige; Although it is only dated (one February, 1343) it is apparently the work of Motoshige judged from the style of its dating and also from the workmanship of its jiba. The deki is very good. His characteristic feature is clearly shown. The shape of the naginata also shows the style of Nanbokuchō period. Rare and important piece; nagasa 1 shaku, 8 sun, 6 bu; January 2005 after the new year. Tanzan has studied and made these notes, kaō.

The condition of the blade is very good and is outstanding, This blade is also published in various well known books (coming soon).

Motoshige usually signed his swords as Bishū Osafune Motoshige or Bishū Osafune-jū Motoshige saku and often dated them. This naginata is the rarest example of nenki (年紀) that is not accompanied a smith signature. The nakago of this naginata, after a detailed study by NBTHK experts, was recognized as ubu, that is, not containing any traces of altering. In addition, there are no traces of the removal of the master's signature on the haki-omote side were found either. Thus, for unknown reasons, this naginata was dated but not signed. There is only one sword extant (this naginata) among 2,399 signed and dated swords extant in category «Jūyō and above» which is dated and not signed with ubu nakago.

The statistics can be found in the following table: