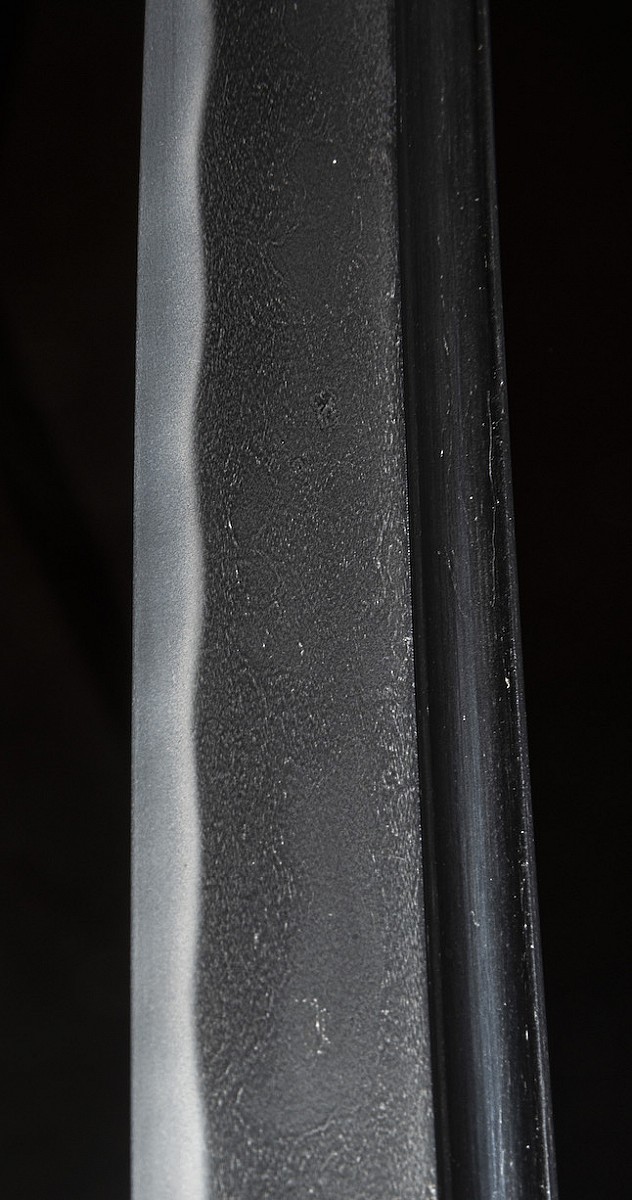 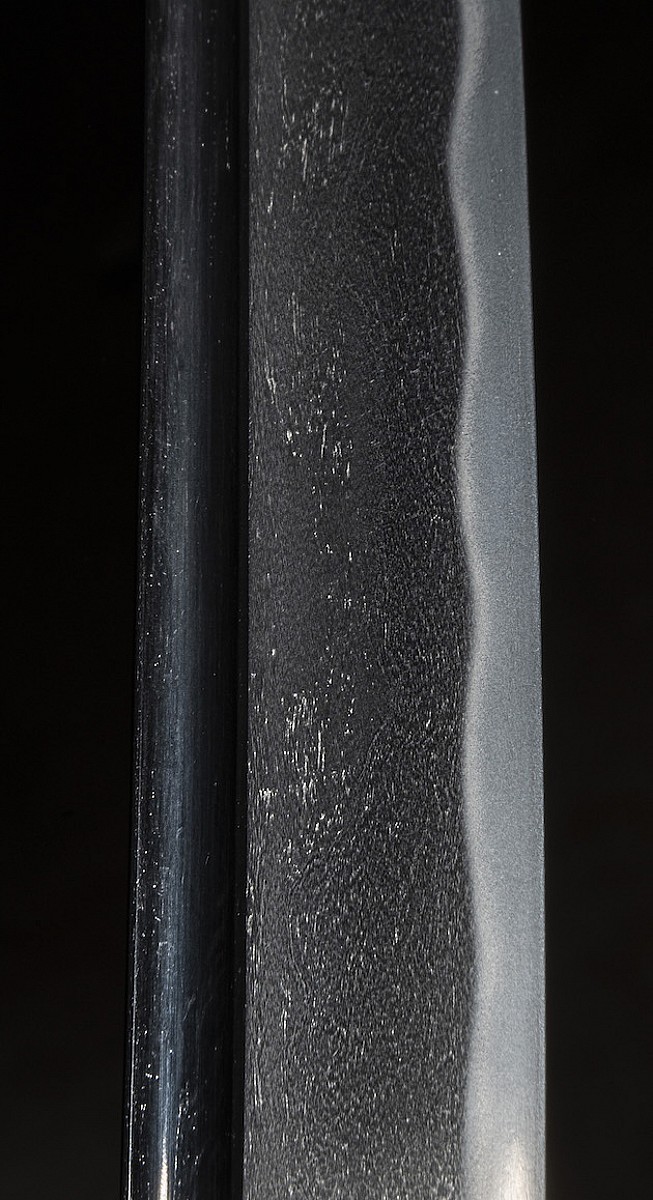 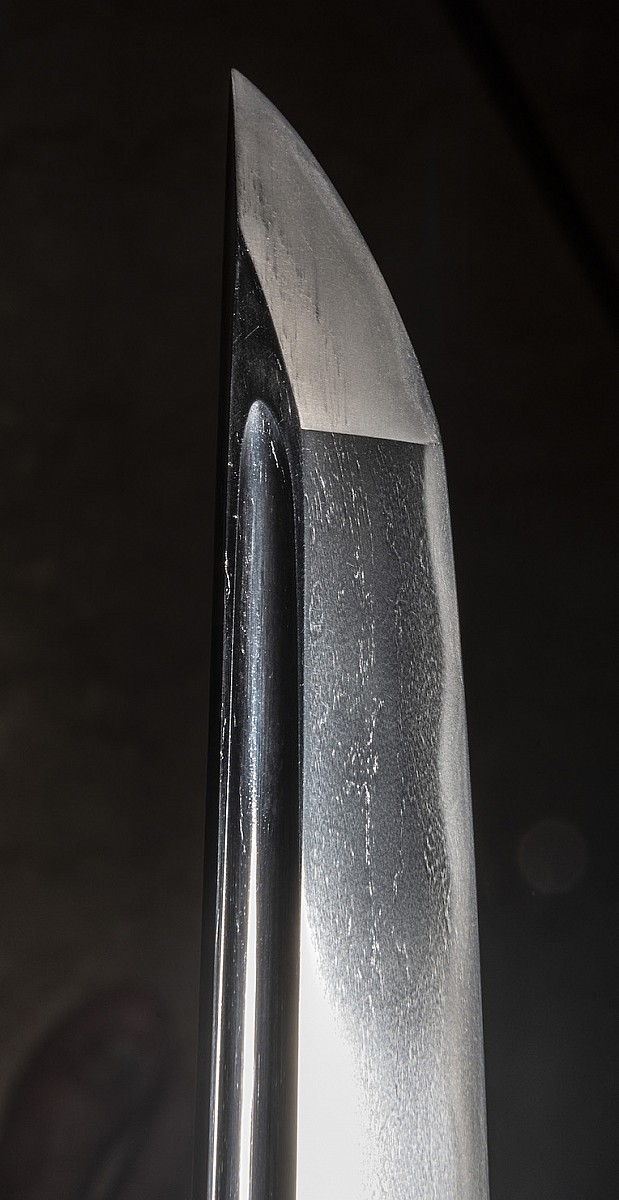 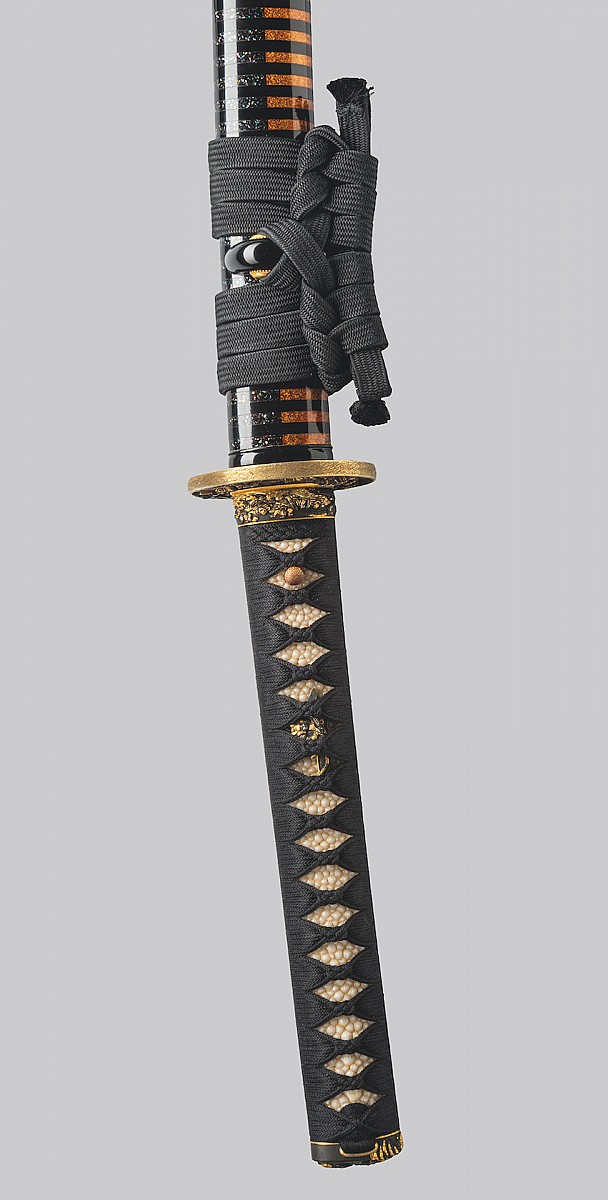 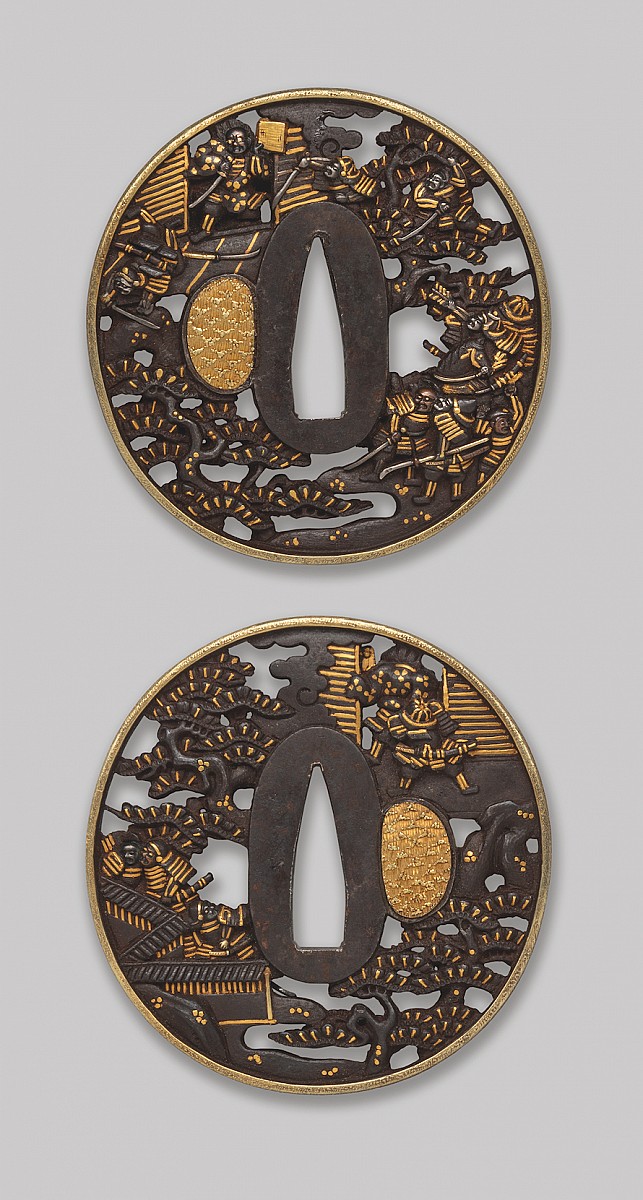 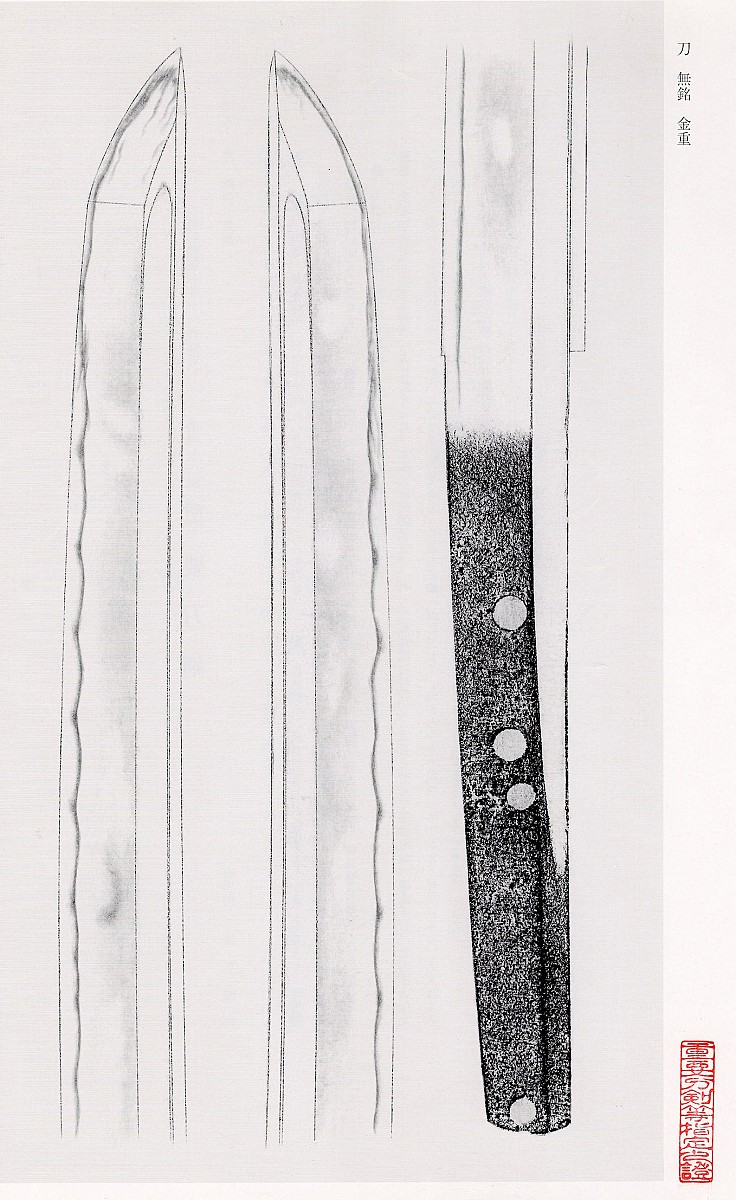 Kinjū (金重), 1st generation, Shōō (正応, 1288–1293), Mino – Kinjū is considered as founder of the Seki smiths, he was working in Echizen under the name „Dōami“ (道阿弥) as priest of the Seisen-ji (清泉寺) and went later to Mino province, it is said that he also born the priest name „Keiyū“ (慶友), one theory says that he was the son of Motoshige (元重), Kinjū is listed as one of the Masamune no Jittetsu. We should note that in later books, the duration of the 1st-generation creativity was moved to a slightly later period—the Gen’ō era (元応, 1319–1321), Tosando (東山道), jōjō-saku.

Designated as Jūyō Tōken at the 48th jūyō-shinsa held on the 11th of October 2002.

The sword has a blade with a magnificent, impressive shape, which we should expect from Kinjū’s works. It is quite massive, with slight narrowing to the kissaki area. However, it is perfectly balanced and naturally fits the hand, without the sense of being unwieldy. Just like all of Kinjū’s long swords, the blade was greatly shortened, so the master’s signature was lost. The shortening was done with great skill, very delicately and professionally, which is very similar to the work of the Umetada masters.

Kinjū, like Shizu Kaneuji, very often forged works similar to this sword, with a bright, impressive masame, mixed with a large itame, and soft hamon lines with threads of nie, sunagashi, and kinsuji. However, this sword of Kinjū was made in a slightly different style of forging—its hada was much more homogeneous and of much better quality. Nie are distributed more evenly, and its hamon has a more classic, softer layout. Masame-hada is implicitly visible, and itame-hada dominates, as it is dense and homogeneous. The steel has a “wet” blackish color with a characteristic glossy shine, indicating the origin of raw materials from Echizen Province. Only the steel from iron-containing sand located near Hokurikudo (北陸道) Road, passing through Echizen Province, has this color.

Another distinguishing feature of this blade is the presence of jifu-utsuri (地斑映り) in the ji area, which is an extremely rare element. Jifu-utsuri is represented by black spots and areas along the entire length of the blade, which very naturally combine with the dark glossy color of the steel. Moreover, this work has a special hamon—a homogeneous gunome with notare, almost based on suguha. It can be considered a kind of “trademark,” inherent exclusively to Kinjū’s works alone. This distinctive feature of the sword, which is somewhat different from his usual style, demonstrates his ability to repeat this style in the texture of the hamon on works of a smaller scale. The fact is that the style of most smiths was somewhat different for daitō and tantō. Usually, the shorter the sword, the more difficult it was to balance the yakiba composition, so that the smaller size of the blade matched the smaller size of its hada and hamon pattern. This sword by Kinjū demonstrates that its hamon pattern is fairly similar to those on the master’s tantō. 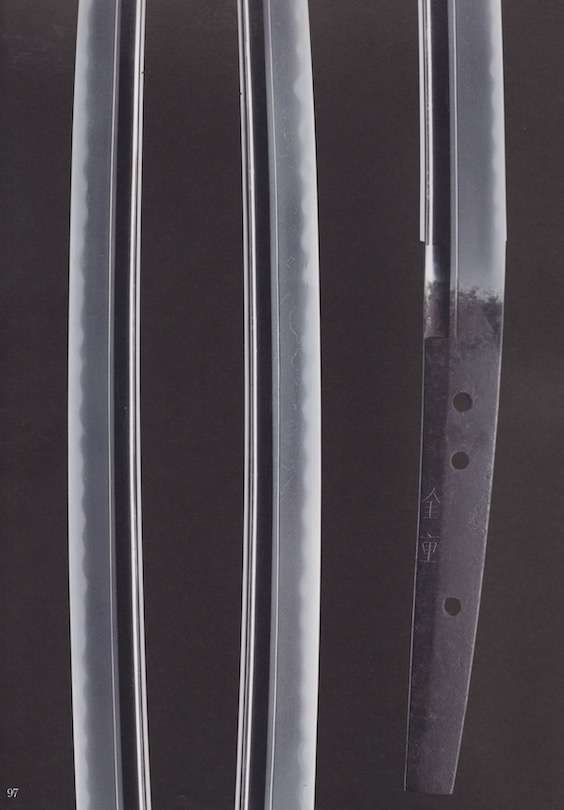 This work is the only one that shows Kinjū’s ability to “minimize” his works. It seems that the master was easily able to duplicate the style he used for short swords when he created long ones, with a perfectly uniform forging style. Oshigata of Kinjū’s signed tantō visually demonstrate this. In this case, the attribution of this unsigned katana is quite obvious and helps experts attribute other works as Kinjū’s, even if they do not have his typical forging features. As a result, this sword is attributed to Kinjū directly, without the “Den” prefix, which was very rare when this master’s works were evaluated (only 9 other long swords have the same direct attribution).

As already noted, the ji-hada of this sword has patches of “flowing” hada, similar to faience and very close to the edge of the blade in the monouchi area. This effect is manifested as a result of the blade being slightly worn, including in the area of the cutting edge where the metal core (shingane) is almost visible. Its narrow yakiba was caused by numerous polishings and storage practices adopted in the periods of Kamakura and Nanbokuchō. However, the sword can still be described as being in excellent condition, especially compared to blades of the Kamakura period, due to methods of sword preservation that were adhered to for many centuries.

It is also possible that the sugata of this sword was slightly modified when deep kirikomi (切り込み—notches) were made in the monouchi area during actual combat. The ha in this area is much thinner than the rest of the blade. As a result of slight re-sharpening, its sakihaba changed, and the narrowing of the blade became more pronounced.

Assuredly, Kinjū was not an extremely “expensive” master for his time, and in that era, swords of this type were mainly designed and forged for practical purposes. Such a sword often accompanied its owner in military campaigns and was constantly worn as a weapon. Many smiths tried to make swords that best met these requirements. This work of Kinjū’s, which a samurai of high position could afford, is an example of an actual combat weapon. The sword has survived in excellent condition, despite the numerous polishings and the indisputable use of this sword both in combat and for everyday wearing in the service of performing official duties.

<.....> Another interesting feature of Kinjū’s works is that they are almost completely unavailable to collectors. Despite the fact that Kinjū is not one of the Sōshū-Den “big names,” and it is impossible to compare him with, for example, Yukimitsu, Sadamune, or Hiromitsu, the market situation for this master’s works makes them almost impossible to find. If someone is eager to acquire Kinjū’s work for his collection, his wish may never come true. Despite its lower cost, a sword by Kinjū is much rarer than, for instance, one by Sadamune. The fact is that his works are simply not for sale, because anyone who owns a sword by Kinjū wants to keep it in his collection. Collectors perfectly understand the swords’ great rarity and the fact that one can search for this master’s works for ten years or more without encountering a single offer. When talking to famous dealers in Japan, we hear the absurd statement that it’s easier to find Masamune’s swords than Kinjū’s. This set of circumstances proves how the personal preferences of collectors influence the market, making Kinjū’s swords almost impossible to purchase.