24 january 2020
According to data from old manuscripts, he was the second son of Shintōgo Kunimitsu (新藤五國光).

The period of Kunihiro's creative activity dates back to the beginning of the Sōshū School’s foundation in Sagami province. The central figure of this process was Shintōgo Kunimitsu. The formation of the Sōshū-Den took place around Kunimitsu, who laid the foundation for the emergence of new swordsmithing techniques. At that time, the group of “senior” disciples whom Shintōgo trained included Yukimitsu (行光), Masamune (正宗), and Norishige (則重), as well as his three sons: Kunishige (國重), Kunihiro (國廣), and Kuniyasu (國泰).

According to Fujishiro san, Yukimitsu’s genealogical line was that of Shintōgo’s disciple. This branch was not the central one in Kamakura during his teacher’s life. Besides, Shintōgo was a much more famous master, a leading smith and the head of the school, so his creative vision and his works were more important at that time. For this reason, his son Kunihiro and his senior disciple Yukimitsu were involved as Shintōgo’s assistants and disciples for quite a long time, having almost no opportunities to use their own creativity.

In accordance with the traditions passed from ancient times, Kunihiro as one of the eldest son of a large clan was a center and was working together with his father. Accordingly with traditions Kunihiro takes «kuni» kanji from the father’s name for forming his own. In addition, taking into account findings from modern research, the most convincing theory is that Hiromitsu was a representative of the direct line of Shintōgo Kunimitsu and a son of Shintōgo Kunihiro. In this way, his genealogical line is as follows: Shintōgo Kunimitsu—Shintōgo Kunihiro—Hiromitsu. This point of view was also supported by Fujishiro Yoshio. In this case, we can completely understand the logic of how Hiromitsu’s smith name was formed from the last kanji of his father’s and his grandfather’s names.

It’s easy to notice that Hiromitsu was a kind of barrier to which the «Kuni» kanji was common in the main Sōshū genealogical line, and after that the “Hiro” kanji became common as a tradition extended into Muromachi period. One can find smith names, widespread for this period like Hiromasa, Masahiro, Sukehiro, Hirotsugu and rarely Kunihiro. It is unclear why this change of traditional kanji occurred, however, it can be noted that “Kuni” kanji was characteristic of the names of Yamashiro Rai swordsmiths and this fact can be considered as confirmation of their connection, while the use of “Mitsu” kanji was typical for the Bizen School. In the Kokon Meizukushi Taizen there is an interesting information that three swordsmiths: Shintōgo, Kunishige, and Kunihiro signed the left inner part of the “Kuni” kanji the same way (a mirrored “S”). Thus, the Kunihiro line is a direct line of his father and the founder of the Sōshū-Den: Shintōgo Kunimitsu (originated from Kunimune), which developed according to the the father – son relationship traditions. At the same time, the so-called side line developed in Kamakura started from Yukimitsu and Masamune (senior disciples): Yukimitsu—Masamune—Sadamune—Akihiro. It is quite possible that Kunihiro was a last main line Sōshū representatives who used «Kuni» kanji as common for smith name. After Hiromitsu was taught by Masamune, the main line was mixed with the sideline and the «Hiro» kanji began to be used as a common for a new generation Sōshū smiths.

Kunihiro (國廣) was the second son of Shintōgo Kunimitsu. Accordingly to different manuscripts, Kunihiro borne the first name Shindō Gojirō (新藤五次郎) or Jirō (次郎) or Shintōgo (新藤五). Some old books pointed that Kunihiro has a so-called family name Hasebe (長谷部). There is old oshigata preserved with signature Hasebe Kunihiro (長谷部國廣) and it is possible to consider it as confirmation that Kunihiro used his family name in the signatures in the same way as his father Shintōgo Kunimitsu did before. 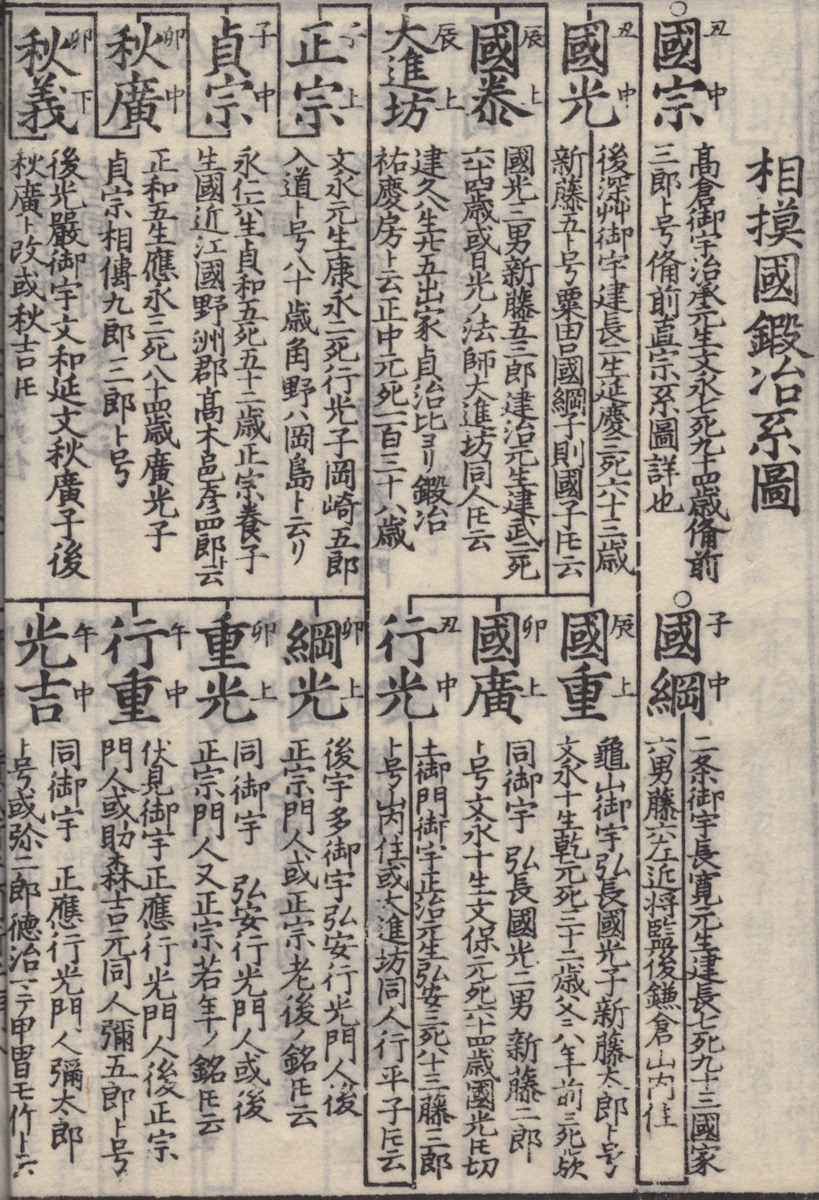 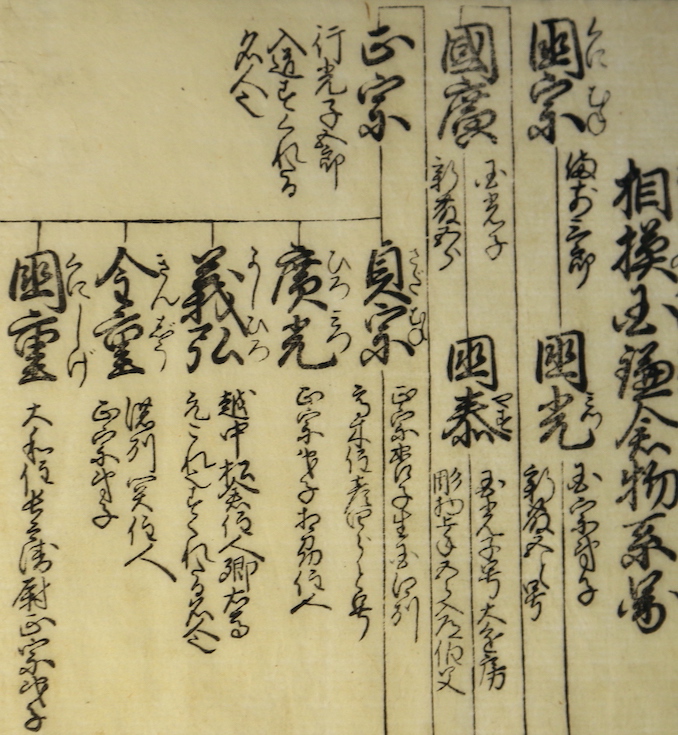 There is another one portion of information in the Kokon Meizukushi Taizen: KUNIHIRO (國廣) around Genkō era (元弘, 1331-1334), borne first Shindō Gojirō (新藤五次郎). His tachi-sugata features a somewhat wider mihaba than that of his father [Shintōgo Kunimitsu]. The kitae is an itame with some uzumaki and the steel's color is whitish. His tempering type was mostly a chū-suguha whose habuchi resembles torn paper. Utsuri and uchinoke appear often and horimono are often wide and large and remind of Rai Kunitsugu. The nakago is a little bit wider and thicker than that of his father and of his elder brother. He signed his works during a later part of the his career as "Kunimitsu" too, although his kanji for "Kuni" was chiselled somewhat wider compared to his father’s. All three swordsmiths, (i.e. Shintōgo, Kunishige, and Kunihiro) signed the left inner part of the «Kuni» kanji in the same way.

The Tōken Kantei Hikketsu (刀剣鑑定秘訣, Hon’ami Yasaburō, 1905, Volume 3 [6], p. 25) states that Kunihiro was the younger brother of Kunishige and his name was Shindō Gojirō (新藤五次郎). His tachi-sugata features a somewhat wider mihaba than that of his father. He mostly hardened his swords in suguha that shows uchinoke and his ji is usually has a somewhat whitish hue. As for horimono, they are often wide and large and remind of the engravings of Rai Kunitsugu. The ji is basically the same as Kunimitsu’s. The nakago is a little bit wider than that of his father and of his elder brother and is also relatively thick. Like his elder brother, Kunihiro signed as “Kunimitsu” too and in this case, the «Kuni» kanji is also chiseled in about the same way as seen at his father’s works.

Like Kunishige, Kunihiro changed his name to Kunimitsu in his later years, although signed works are inferior of the quality to that of the father's [i.e. Shintōgo Kunimitsu]. 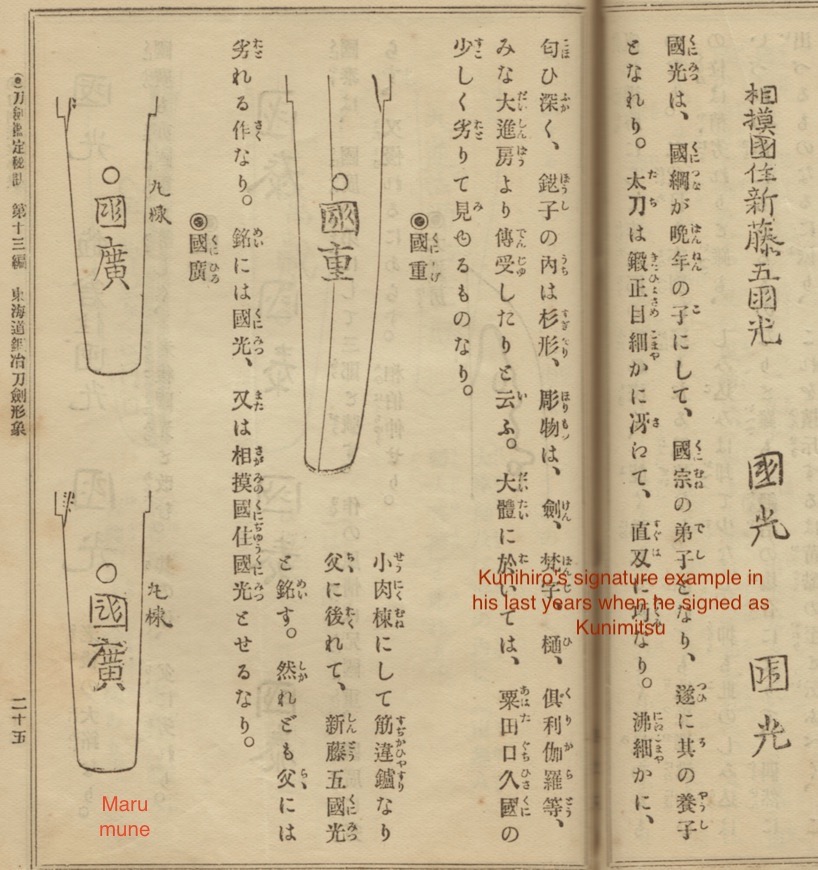 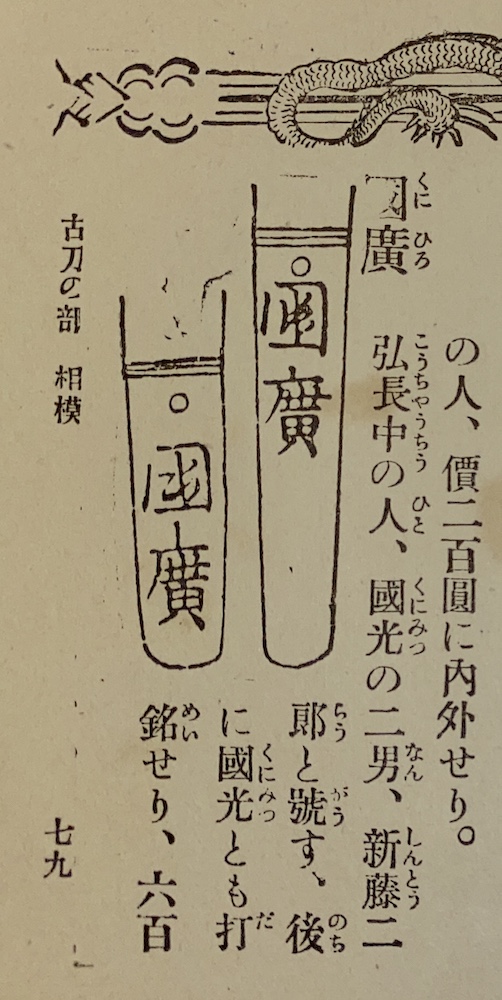 According to the Fujishiro Yoshio (藤代義雄) rating, Kunihiro’s works occupy the saijō-saku (最上作) level (the superior level of workmanship). As of today, only 14 swords are known (Jūyō and above) to be Kunihiro’s work. There are no daitō swords among them. Of all his works known to us, 2 tantō (both are signed and dated) have Jūyō Bunkazai status and 12 are Jūyō Tōken (three swords among them are signed).

As we can see, extremely few works attributed as Kunihiro have preserved to our times, and even less known as signed and dated works. They can be listed as follows

Dated Kunihiro’s swords in oshigata can be listed as follow:

When analyzing the signed works of Kunihiro, one should pay attention for two very interesting circumstances. The first concerns the signature of the master on his works. Most often, Kunihiro signed, chiseling two kanji "Kuni" and "Hiro" on the tang, that is, in the niji-mei way. However, there are examples of Kunihiro’s signature (for example, on both Jūyō Bunkazai swords), where Kunihiro signed in a very unusual way: «Kunihiro Kamakura-jūnin». This method distinguishes in it’s from all other masters of the Sagami School and has not been used by anyone else. By originality, this method is comparable only to the manner of signing his swords by Samonji, when he wrote a combination of the “Sa” kanji on the omote side and “Chikushū-jū” on the ura side—or “Chikushū-jū Sa” on one side of the nakago. It is necessary to pay attention on the "Kuni" kanji, were there is minored S in the left side of the square. 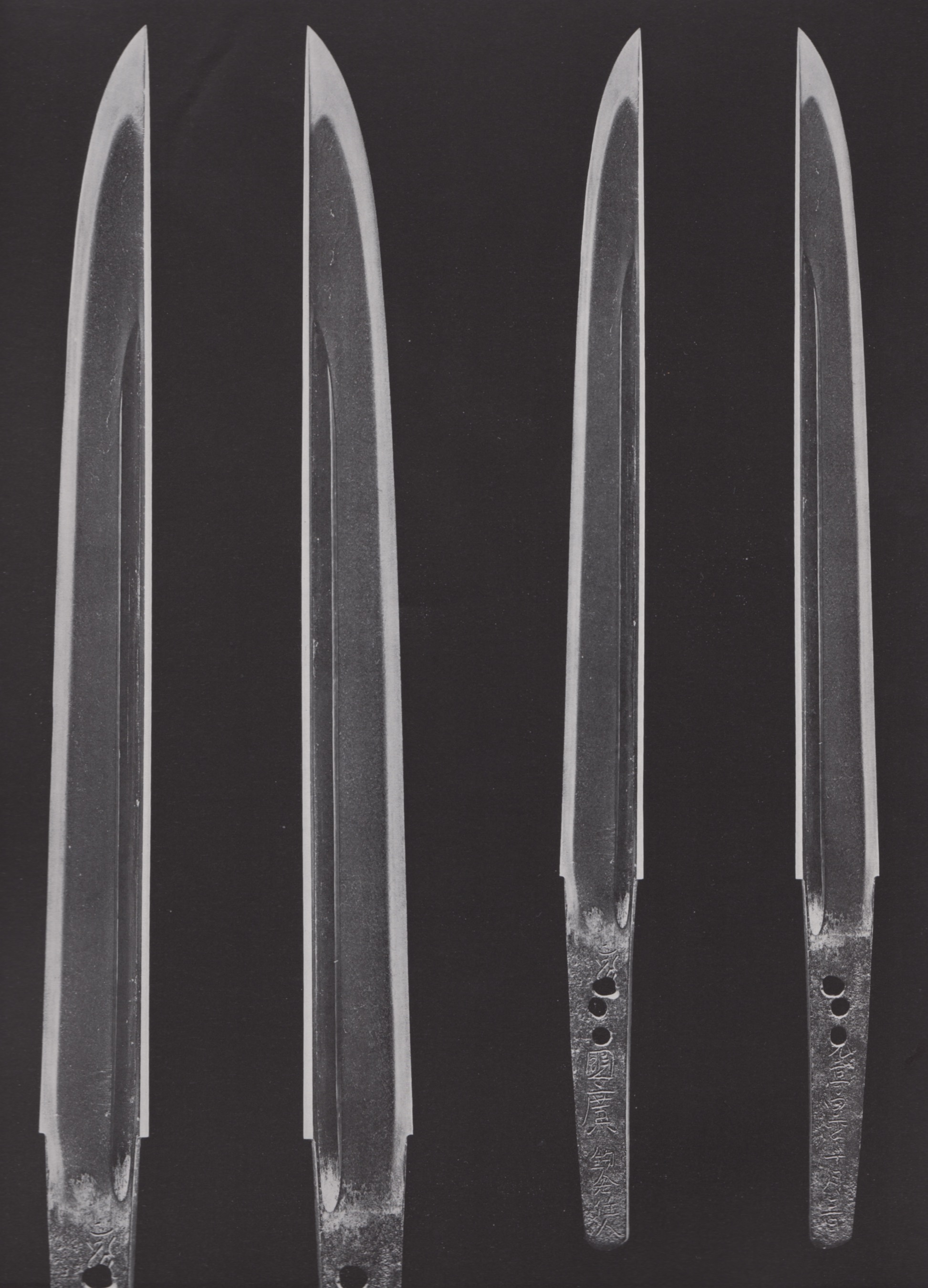 Dr. Honma Junji comment: "In general, Kunihiro's tantō are slightly larger in size than those made by Kunimitsu. However, this tantō is very small to such an extent that a tanto of this size is hardly found in Kunimitsu's works. The characteristics shown in this blade are very similar to those of Kunimitsu, except the turn-back of the bōshi which exhibits a typical pattern of Kunihiro."

The other concerns the dated Kunihiro’s works, which have dating between Bunpō (文保, 1317-1319) and Gentoku (元徳, 1329-1331) eras. That is why, the period of Kunihiro’s creative activity is usually indicated as the Genkō era (元享, 1321-1324), and not Shōō era (正應, 1288-1293), when he supposedly began working with his father Shintōgo Kunimitsu in the forge workshops of Sagami School. There are no swords dated from earlier dates. It can be assumed that the swords signed in the niji-mei way were produced in an earlier period [around Einin (永仁, 1293-1299) era for example], but were not dated due to the fact that the swords with niji-mei Kunihiro did not ever dated. It is still necessary to take into account the fact that many old manuscripts indicate that Kunihiro was probably working as a daisaku of Shintōgo Kunimitsu in his twilight years.

The daisaku (代作) is a sword made by a disciple behalf of the name of his teacher with the teacher’s permission under the his guidance and signed by the teacher himself after inspection. Kunihiro and Yukimitsu have been assistants of Shintōgo Kunimitsu for a long time and it is quietly possible that Kunihiro began to date his swords in his late years too. In addition, taking into account dated works, it is most likely necessary to adjust the dates of Kunihiro’s life indicated in old manuscripts. It could be indicated as followed (based on the Honchō Kaji Kō information): he was born in the 10th year of the Bun ́ei era (文永, 1273) and died in the first year of the Engen era (延元, 1336) in the 64 year of his life. 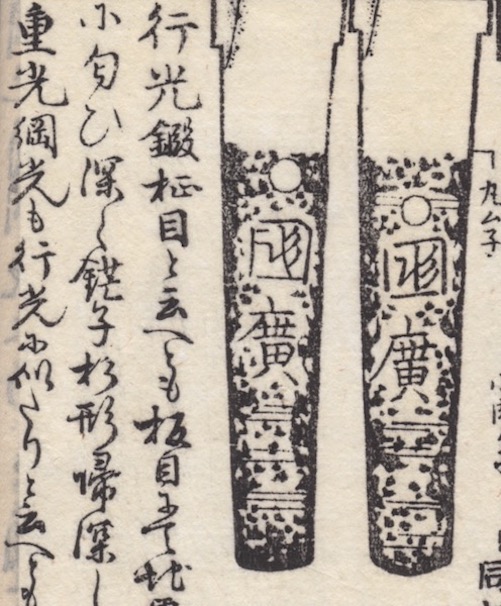