14 february 2020
Hōki no Kami Masayuki (伯耆守正幸) was one of the best Satsuma (薩摩) smiths during the late Edo period. Masayuki’s forging technique was superior for this time period.

Hōki no Kami Masayuki (伯耆守正幸) was born in the 18th year of the Kyōhō era (享保, 1733). He was a son of the 2nd generation Ijichi Masayoshi (伊地知正良), his family name was Ijichi (伊地知) and his first name was Jiuemon (次右衛門). One could found another variant of his first name in the old books: Chūzō (仲蔵) and Heikaku (平覚). Masayuki was one of the best Satsuma (薩摩) smiths during the late Edo period. His line was in the Masachika (正近) mon, who was in turn was a disciple of the Mondo no Shō Masakiyo (主水正正清).

In the 1st of December, 1789 Masayuki received the honorary title „Hōki no Kami“ on the same day on which Oku Motohira was awarded the honorary title „Yamato no Kami“. Masayuki’s forging technique was superior for this time period and was much higher than his father’s skill level. Before receiving the Hoki no Kami title he was using the Satsuma Kanko (薩摩官工) title authorised by the 8th Shimazu Lord Shigehide in 1785 that could be literally translated as „official smith of the Satsuma fief“ and thus was already recognised as a smith producing swords of the highest quality by his Lord. Masayuki died on the 22th day of the fourth month of the Bunka one (文政, 1818) at the age of 86.

Regarding Masayuki’s names using for signatures it is necessary indicate that: 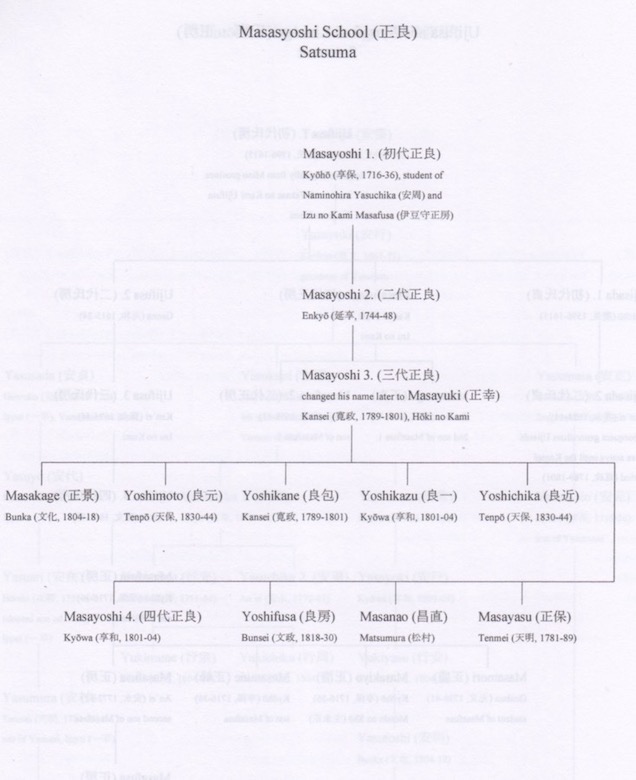 Masayuki was famous also as a great teacher and author of the book devoted to Japanese swordsmithing art. According to preserved documents, he trained more that forty disciples. The main characteristics of Masayoshi workmanship are: wide mihaba, ō-kissaki, itame-hada with ji- nie, hamon togari-gonome with ara-nie. It is said that Masayoshi was a very skilful engraver and made horimono for his swords himself.

Satsuma province was under the government of the Shimazu family. The Shimazu played a significant role in Japanese history. The clan participated in many battles and political events and also became famous for having the samurai with the best fighting skills. The Shimazu are direct descendants of the Minamoto clan. The founder of the clan is Shimazu Tadahisa (島津忠久, ?– 1227), who was the son of shōgun Minamoto no Yoritomo (源頼朝, 1147–1199), and his wife, Tango no Naishi (丹後内侍), who was the sister of the famous warlord Hiki Yoshikazu (比企能員, ?– 1203). Initially, in 1186, Tadahisa ruled only the Shioda region of Shinano Province, but by 1196, he had eventually become the ruler of Satsuma Province on Kyūshū.

The large southern island of Kyūshū always stood aloof from major political and military currents of medieval Japan. Its aloofness can be explained by the fact that even though different clans of the island opposed one another, any attempts by outsiders to conquer the island ended in defeat. Kyūshū and its inhabitants were a completely different world. They always stood together when an external threat occurred, and they independently repulsed the Mongol invasion. All attempts of Minamoto no Noriyori to conquer the island in the Heian period ended in failure: his troops advanced no more than thirty miles deep into the island after landing.

Since Tadahisa, the dominant force of Kyūshū has always been the Shimazu clan, which had the most coordinated and best-trained army. Due to their excellent tactical training, discipline, and complete understanding of strategy, the Shimazu’s troops repeatedly won over superior enemy forces. The favorite tactic of the clan warriors was to retreat, provoking the enemy into rash pursuit. This error led enemies of the clan either to a prepared ambush or to being attacked at their flanks. It was in the territory of the Shimazu clan where, in 1543, the Portuguese landed for the first time and introduced the clan to firearms and Christianity. In 1549, for the first time in Japanese history, Shimazu Takahisa (島津貴久 1514–1571) used firearms in combat. This is a historical fact.

During the Battle of Sekigahara in 1600, the Shimazu clan fought against Tokugawa Ieyasu on the side of the Western Army. Showing their resoluteness, the clan troops did not run from the battlefield but, on the contrary, broke through the ranks of Tokugawa’s warriors. Thus, they could take their own ships and return to their native province. Ieyasu was delighted with the courage of the Shimazu warriors and pretty soon concluded an agreement with Shimazu Yoshihiro. However, through this, the clan lost most of its possessions, although Satsuma, their native province, was still under their control.

In the relatively peaceful times of the Edo period, the Shimazu remained large and powerful with a traditionally strong economy. The annual revenue of the Shimazu family was estimated at 770,000 koku. The clan itself had good management and an excellent army, consisting of the best-trained warriors. The clan played a noticeable role during the Meiji Restoration, as the clan was very often opposed to the dynasty of the Tokugawa shōguns and advocated a broad introduction of Western civilization’s achievements, especially in its native province. Therefore, the Shimazu played an important role in establishing the power of Emperor Meiji in the course of the Boshin War (戊辰戦争) in 1868. 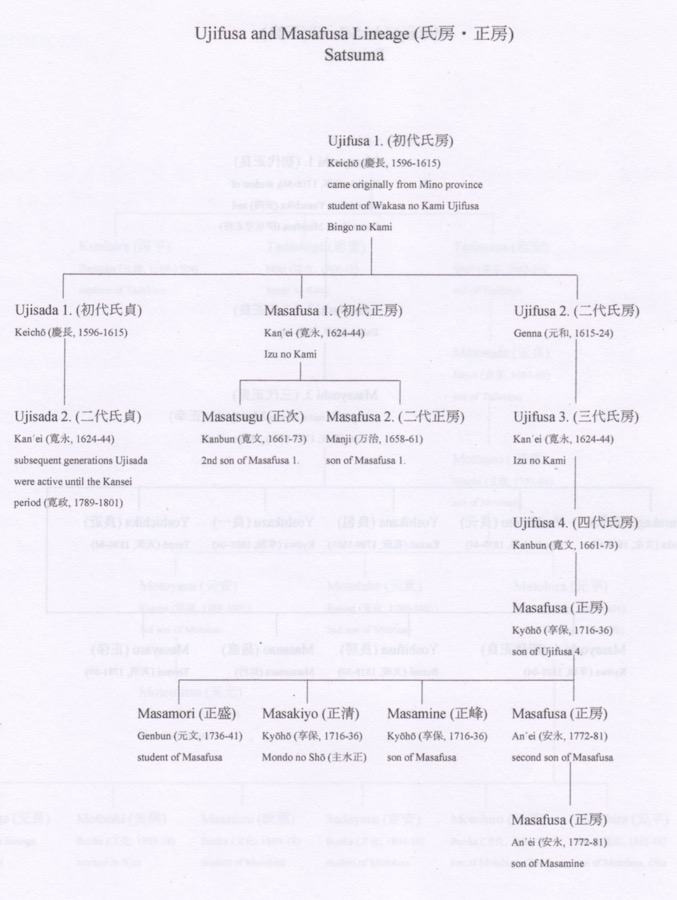 Satsuma style is a combination of Mino traditions with beautiful and flamboyant Sōshū-Den ō- midare hamon consisting of ara-nie mixed with togari-ba. Such was the fame of the Satsuma smiths that mature smiths such as Terunoshin Motonaga (Owari province) and Yokoyama Sukehira (Bizen province) come to Satsuma to study Sōshū-Den from them. There are two important distinctive characteristics for Satsuma swords: thick inazuma that appear in the habuchi inside the hamon is well-known as imozuru (芋蔓, i.e literary: «potato runners») and so-called Sastuma-gane - a thick and long black lines similar to chikei which appear in the ji area.