Hōjōji (法城寺) School originated in the early Nanbokuchō (1334–1392) period and leads its history through the Edo period times until our days. Traditionally, Hōjōji is associated with swordsmiths having its origin from the Tajima (但馬) Province bearing the name Tanshu (但州) in the old days.

It is said that Tajima Hōjōji is name of the place located now in Izuishi district of Toyooka city in the Hyōgo Prefecture. On the other hand, Hōjō-ji it’s also the name of a Buddhist temple in Kyōto, was built around the year 1017, by Fujiwara no Michinaga. However, this connection does not look so obvious since this temple was destroyed by fire in 1053 and not rebuilt.

Historically, Hōjōji Kunimitsu (法城寺国光) is considered as the founder of the Hōjōji School, and he was listed as on of the three disciples of Sōshū Sadamune (so-called

Sadamune no santetsu, 貞宗三哲). In fairness, it should be noted that many modern scholars find the connection between Kunimitsu and Sadamune unlikely, based on the fact that the style of Kunimitsu’s work is very different from that seen in Sadamune’s swords.

The problem here are that there are only several signed tantō, left by Kunimitsu extant in our days and there are almost no signed daitō. Looking at some signed tantō like Tokubetsu Jūyō #25 and Jūyō Bunkazai #280 we can find in these works common characteristic features in sugata and hamon similar to Shintōgo Kunimitsu and even to Etchū Norishige works. The Hōjōji Kunimitsu’s period of artistic activity is indicated usually as Jōji era (貞治, 1362-1368). However, as often happens, these data are somewhat contrary to the information contained in the Koto Mezukushi Taizen (古刀銘盡大全). We can find there the following information:

According to information contained in the Koto Mezukushi Taizen, we can supposed that Hōjōji Kunimitsu was born around 1289 year. Therefore, the period of his activity should be designated as a Kareki era (嘉暦, 1326-1329) which is correspond with Sadamune’s activity period years. The correspondent column in the Koto Mezukushi Taizen regarding Kunimitsu’s life dates can be literally translated as: "he was born in the 2nd year of the Shōō era (正応, 1289) and died in the 65 year of his life in the 4th year of the Bunna era (文和, 1355)." Summing all information from old Meikan books we can supposed the following genealogical line for Hōjōji Kunimitsu: 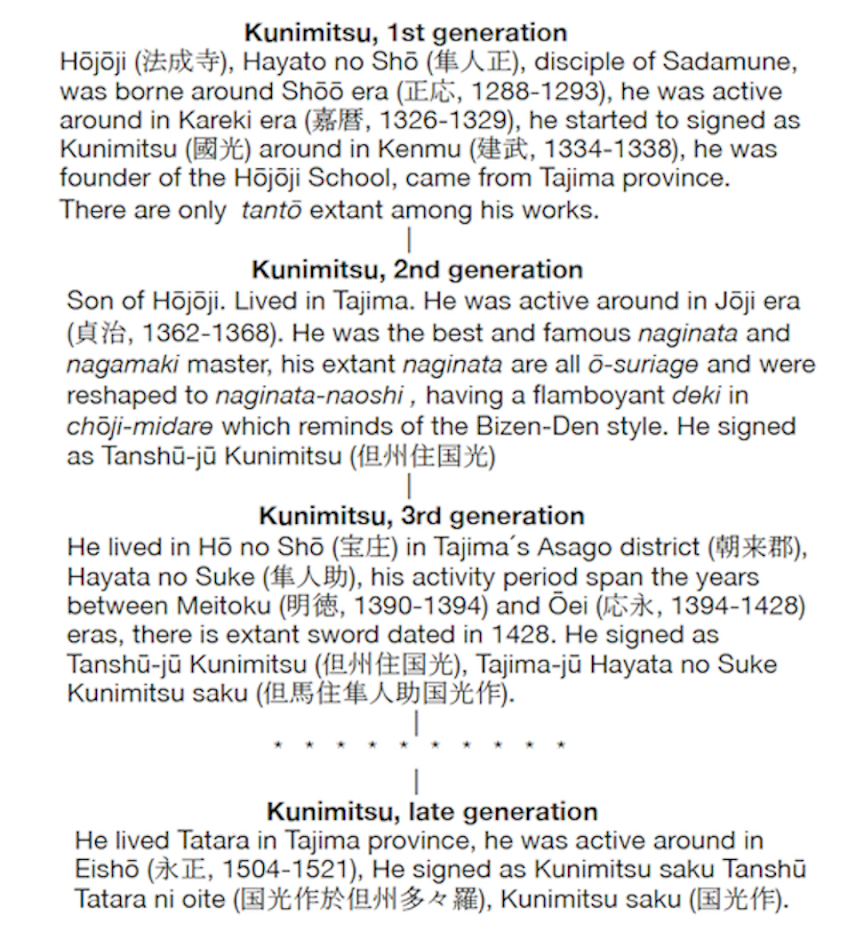 Tajima Province was relatively close to Bizen, and this would account for the Bizen influence in the works of the Hōjōji School. The Hōjōji swordsmiths were famous for making naginata and nagamaki. There is only one naginata extant in its ubu (original) shape, and it is unsigned: Jūyō Bunkazai #281. 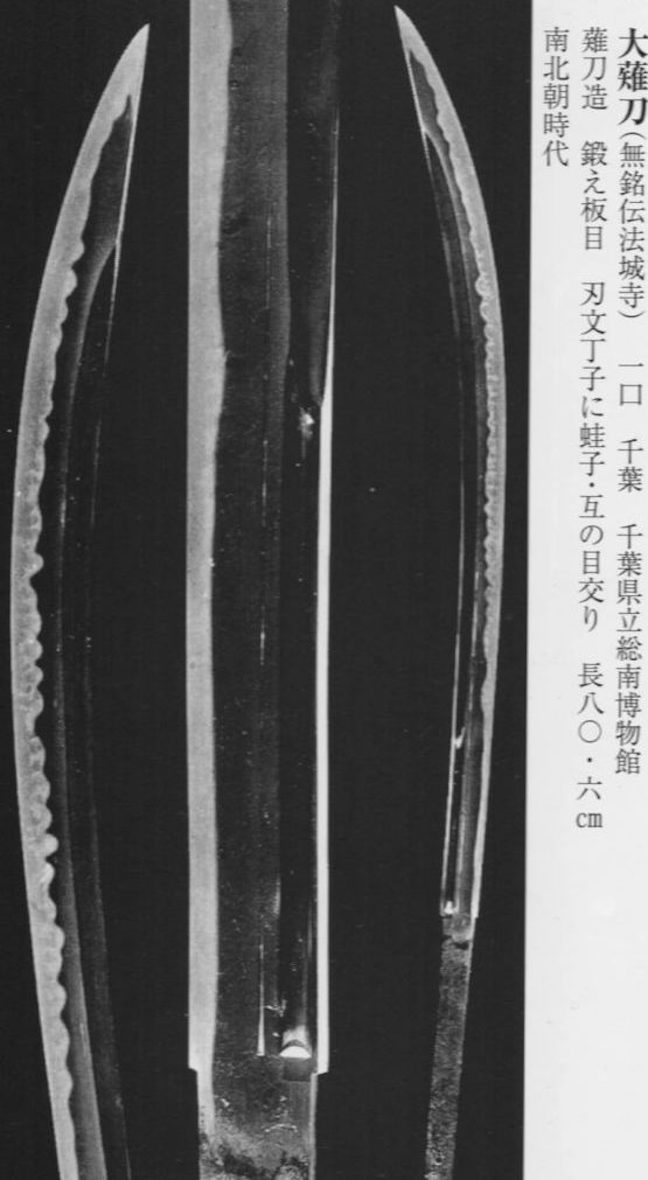 To present time all tachi and almost all naginata and nagamaki have been shortened and signatures lost. Most of the naginata have been reshaped into naginata–naoshi katana or wakizashi with adjusting kissaki area and it is the same with the nagamaki. Undoubtedly, such an exceptional specialization of all the swordsmiths of the school in the manufacture of almost exclusively naginata and nagamaki looks somewhat strange. Darcy Brockbank says in his article "Who is Hōjōji":

"Buckets are useful. Ganmaku is a bucket. Sue-Seki is a bucket. It is a broad classification for things that make for awkward presence in other places. So you make a bucket for it and all similar items can then call that bucket home. So Tanshū Kunimitsu and his Hōjōji school have become home for the naginata naoshi that looks a bit like Ichimonji with some Sōshū worked in but not as good as either. None of these have passed higher than Jūyō, and all of them attributed to Hōjōji are indeed naginata naoshi. The one naginata as mentioned is an exception and it is mumei and ubu unlike these others. So the student who asks “why did Hōjōji make so many naginata?” is getting it a bit wrong. The attribution is a magnet meant to collect up similar works and describe them and so you need to understand it as a description rather than as the solution to a question of who made it. The use of a classification like this to clean up loose ends in biology is called a Wastebasket Taxon. It’s the same principle. Remember attribution is a form of classifying something. If you say Sadamune or Hiromitsu you paint a connection between a blade and their archetype. Hōjōji probably didn’t “like making naginata”, just on one mumei piece Tanshū Kunimitsu and his school got the rest of the load dumped on their shoulders. Now I believe the blades are good and have a place. But it’s just a form of classification to give these things a home. Now this is not to say that this school never made naginata or that these are not made by them. It’s just saying that it is a difficult to answer question and we may never entirely have a clear cut answer, and this is basically the route we take. If we could clearly define the work of the school we would see more tantō and katana/tachi in there rather than strictly naginata-naoshi, so the naginata-naoshi part one has to realize is a major part of why these blades are attributed as they are." [ source: https://blog.yuhindo.com/who-is-hojoji/ ]

It is very interesting point of view and it should be taken into account but with giving one more precise definition: making naginata and nagamaki was not exclusively specialization of the Hōjōji School. There are a lot of examples extant swords, made by Hōjōji smiths in ordinary katana and tachi shapes either among Juyo sword and sword’s oshigata one can find in old books. For example, Jūyō Tōken #11 and 61, made as katana having ordinary shape were attributed to Hōjōji Kunimitsu; Jūyō Tōken #12, 33 and 41 were attributed to Hōjōji. 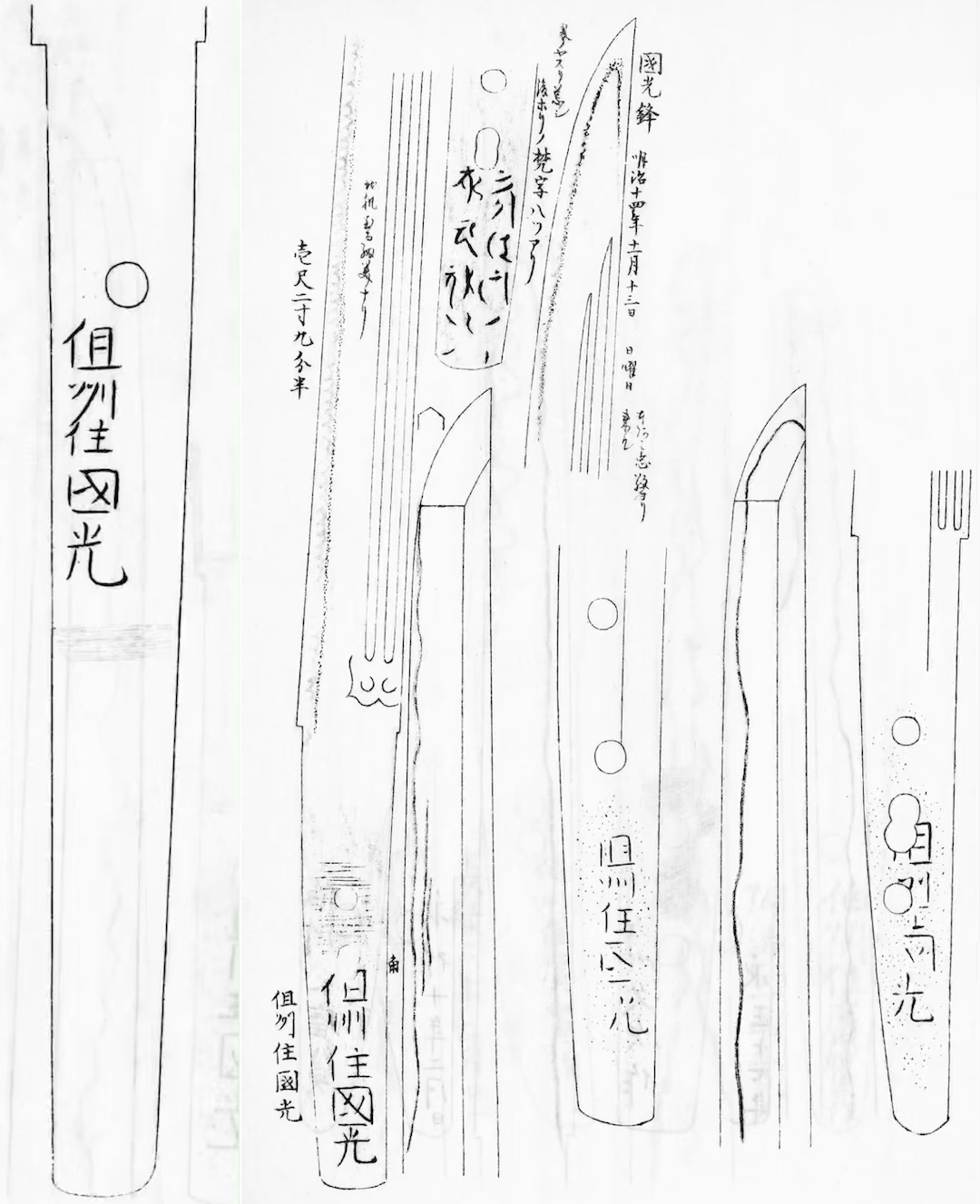 The works by Hōjōji had the following main features:

Sugata: Tachi are usually shinogi-zukuri with a high shinogi. They will have a shallow toriizori without much difference in width from the machi to the yokote. The kissaki will be long and the fukura will lack roundness. This school was most famous for its production of splendid naginata and nagamaki. Almost all of these have lost their original shape due to shortening and conversion into katana and wakizashi. When this is done, they are made into a majestic katana shape and there are some pieces that have been reshaped to have an ō-kissaki. Among tantō, there are some that are of ordinary size for the period with uchizori, and there are some that are of a wide mihaba.

Hamon: A mixture of chōji-midare and gunome-midare with ko-nie and an abundance of sunagashi. The overall feeling will be a combination of Bizen and Sōshū features. The chōji hamon of Kunimitsu is often referred to as chabana-midare (茶花乱れ, chōji-midare with rounded head of the tea flower-petals). The ō-chōji when found more closely resembles that of the Fukuoka Ichimonji School but will be done in nie-deki instead of nioi-deki. There will be long gunome ashi, long kinsuji, and sunagashi. In signed tantō, there is a mixture of suguha, notare, ko-gunome, and gunome-midare.

Bōshi: In katana yakizume is the most common. In tantō, there are pieces with a long kaeri. It is only natural to presume that when the long swords were in their original state they were likely to have had kaeri also.

Horimono: Many of the naginata-naoshi blades retain their original naginata-hi.

Nakago: Practically all works are ō-suriage and mumei with the original nakago being lost. Tantō are kurijiri (the sides of the nakago are not tapered).

It is necessary to distinguish two schools of Hōjōji smiths: of the Nanbokuchō period and the Edo period. The Edo-Hōjōji (江戸法城寺) School was founded by the 1st generation Omi no Kami Masahiro (近江守正廣). Masahiro was named Takigawa Saburōdayū (滝川三郎太夫) at birth and he lived in settlement Hirohara (弘原), located in Tajima Province. He arrived to Edo from Tajima Province and found Edo-Hōjōji smiths line and was active around in Kanbun era (寛文, 1661-1673). Masahiro and his successors especially emphasized their connection with the founder of the Hōjōji School: Kunimitsu. For example, 2nd generation Masahiro described himself as 23rd generation of the Hōjōji Kunimitsu. Assessing this information, it is necessary to take into account the fact that the Kunimitsu line is interrupted by almost 170 before the time of the Masahiro line. Thus, the continuous kinship between the lines of Kunimitsu and Masahiro seems doubtful and we can only talk about "ideological" kinship and succession.

The genealogy line of the Edo-Hōjōji School can be presented as follow: 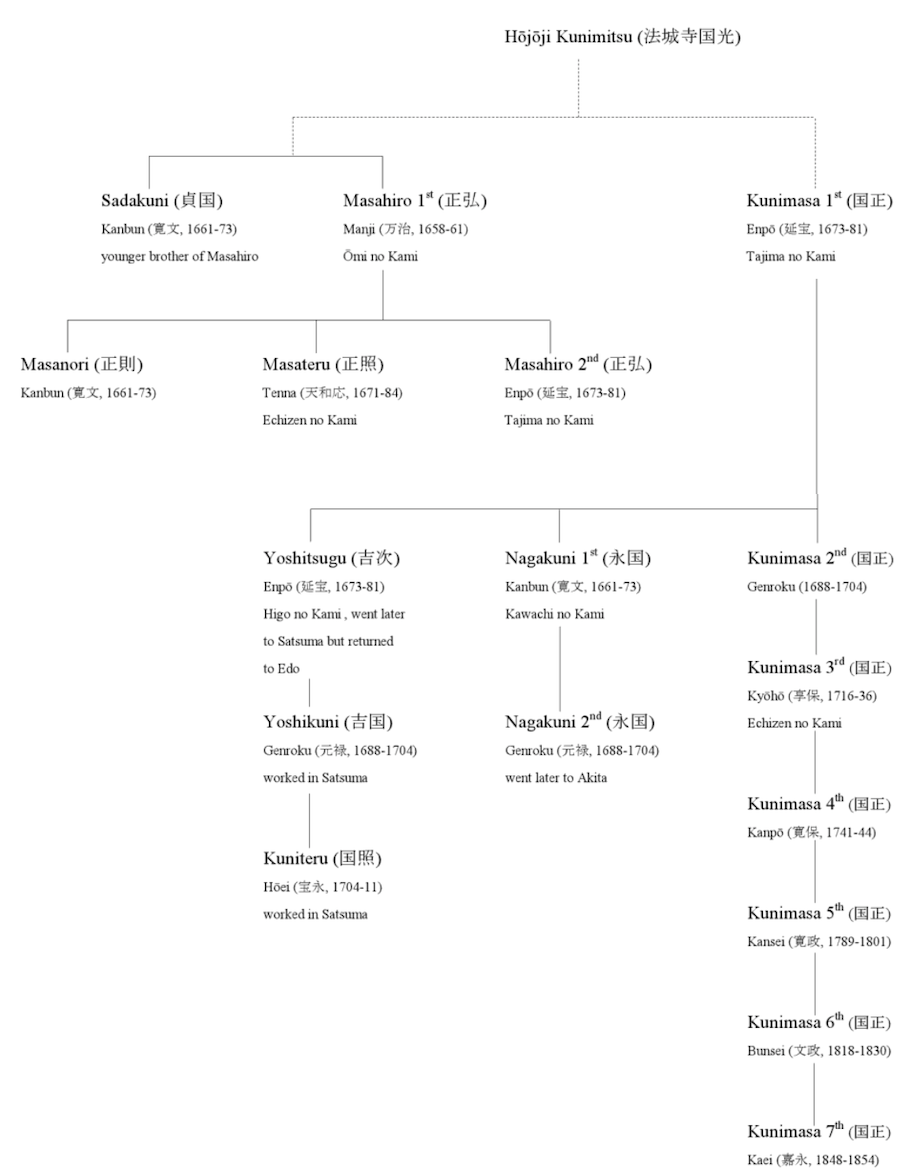